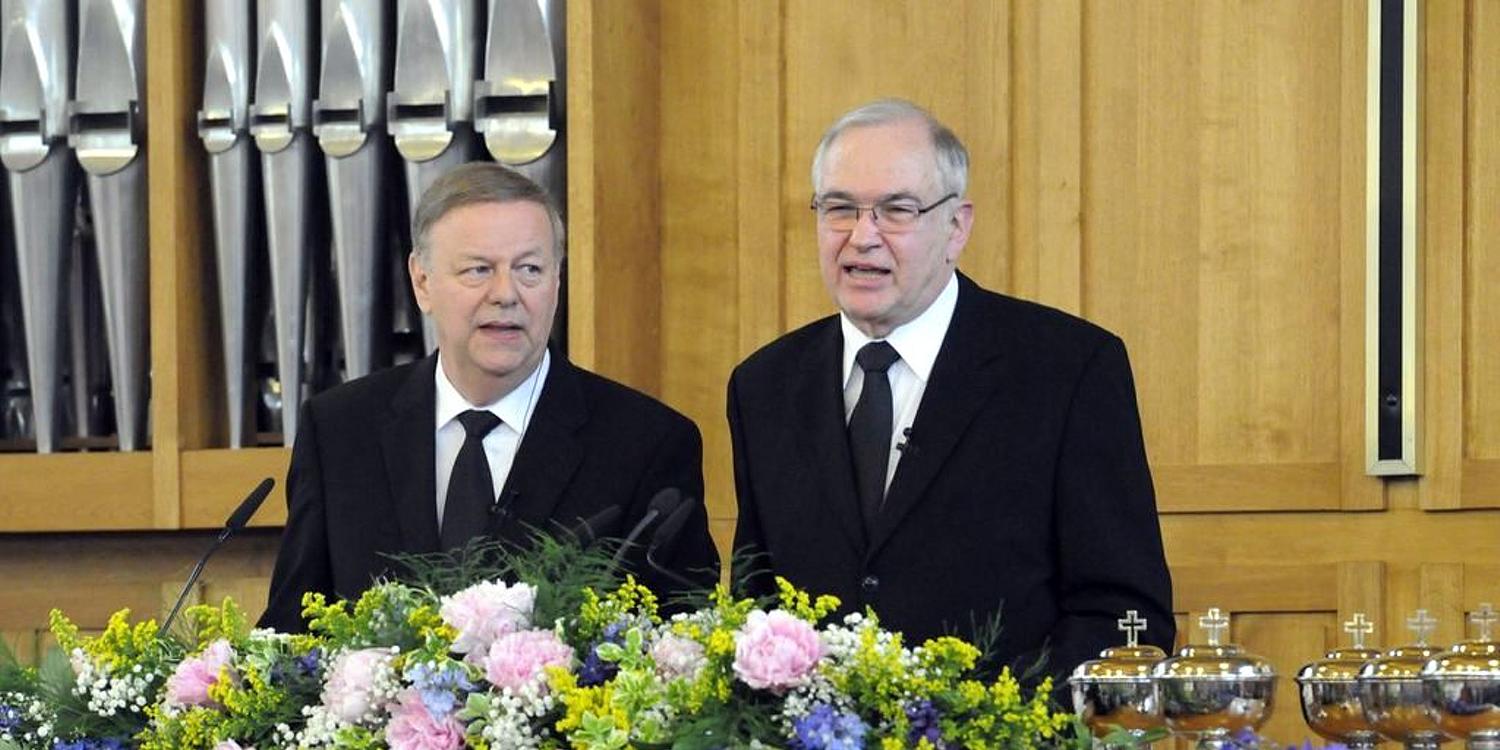 Pentecost 2013: “Surely your salvation is coming!”

Hamburg/Zurich. The New Apostolic Church has a new Chief Apostle. Wilhelm Leber, international Church leader since 2005, conducted his last divine service in Hamburg-Borgfelde this Pentecost Sunday (we reported). Several million people around the world shared in this sermon live via satellite and internet transmission. He called upon the believers to engage and exhibit the power of the Holy Spirit in their everyday surroundings.

As is traditional, Chief Apostle Wilhelm Leber addressed a special Pentecost greeting to all New Apostolic Christians around the world at the beginning of the divine service: “Surely your salvation is coming!” (excerpt from Isaiah 62: 11).

The Chief Apostle emphasised that he understood this Bible text as a “divine promise”.  “The Lord will intervene—not always in the manner we expect and hope, but such that we will know in the end that everything had to be as it was. God has always helped again and again and has intervened in the history of mankind, for example when He sent His Son. And so it will go on,” he added. On this occasion of the 150-year anniversary of the New Apostolic Church he expressed gratitude for all that which had been built up over the past, but immediately went on to add: “Let us also utilise this anniversary of our Church to draw new strength for the future!”

Power from on high

The basis for the sermon in this Pentecost service was a Bible text taken from Luke 24: 49: “…But tarry in the city of Jerusalem until you are endued with power from on high.” This Bible text had already served as the basis of a Pentecost service once before, namely on Pentecost 2005. It was on that occasion that Chief Apostle Leber was ordained into his ministry. “I had not realised this beforehand,” said the Chief Apostle, “so for me it is nice to have come full circle.”

“The Holy Spirit is power from on high,” said the Chief Apostle as he explained the Bible text. It was his wish, he said, that the power of the Holy Spirit be even more strongly felt. “This power shows itself in many aspects: in our work together in the congregation, in our love for one another, and when we cling faithfully to the promise of Jesus’ return.

The wind of love is to be felt in the congregations

In the further course of the sermon the Chief Apostle referred to the image of the Holy Spirit as a wind: “The wind blows where it wishes, and you hear the sound of it, but cannot tell where it comes from and where it goes. So is everyone who is born of the Spirit” (John 3: 8). “The life of the congregation should be characterised by the wind of the Spirit,” said the Chief Apostle in exhortation to the believers around the world. This love should be so strong that it blows away all obstacles. And this is not always a matter of great and spectacular deeds, “but if we all work together in this mind, and if each one of us remains open to the inspiration of the Holy Spirit, it will become as strong as a hurricane. And that will lead to our perfection, to the day of the Lord!”

Spreading the love of God

As he served along, District Apostle Jean-Luc Schneider—who had been appointed Chief Apostle Helper a year before—emphasised that it is the task of all Christians to spread the love of God, so that it can also be revealed in us. God is indeed the Helper, whom many people have sought, but it also requires faith in order to recognise the help of God. “If we act in this manner we will all feel at ease in the congregation—in all parts of the world.”

The designated successor to the Chief Apostle also expressed some thoughts in reference to the upcoming change in the leadership of the Church. Many had asked him how things would go on from here. “Things will carry on as before—onward to the goal of our faith!” promised the Chief Apostle Helper.

A divine service in an historic site

This Hamburg congregation later built a chapel in the location of the present-day congregation of Hamburg-Borgfelde, in which Chief Apostle Leber celebrated this year’s Pentecost service. Some 450 New Apostolic Christians gathered in the church itself, among them all the active District Apostles and District Apostle Helpers from around the world, along with all the Apostles of Europe.

The Chief Apostle had begun the Pentecost weekend on Saturday morning with an Apostle Meeting in which he looked back on his term of office and asked the Apostles to put their trust in the new Chief Apostle. On Saturday afternoon there was a concert in Hamburg’s Laeiszhalle which was captioned by the motto: “I feel the Spirit”. Five different ensembles took turns presenting a broad spectrum of music ranging from sacred hymns to more contemporary sounds. 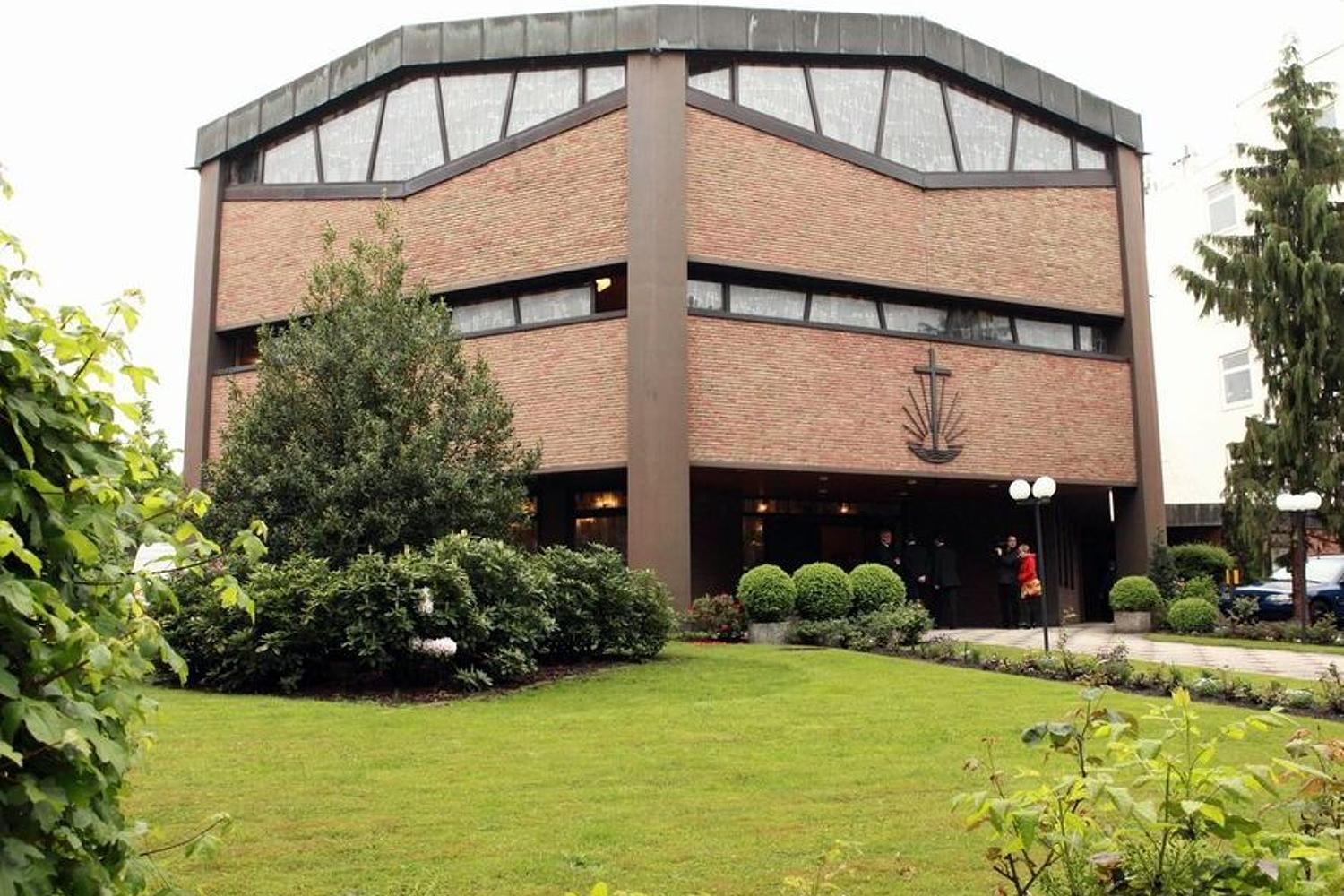 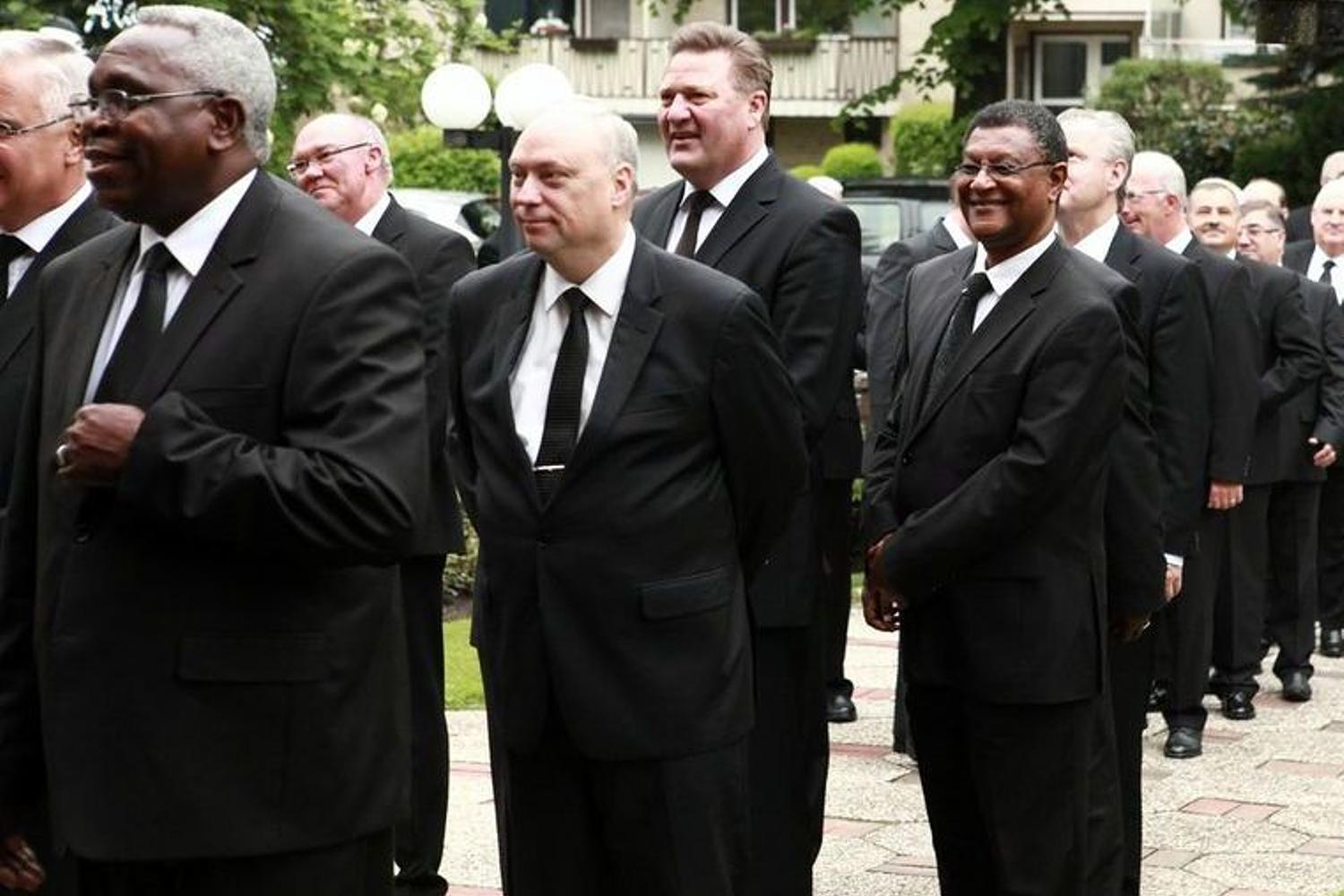 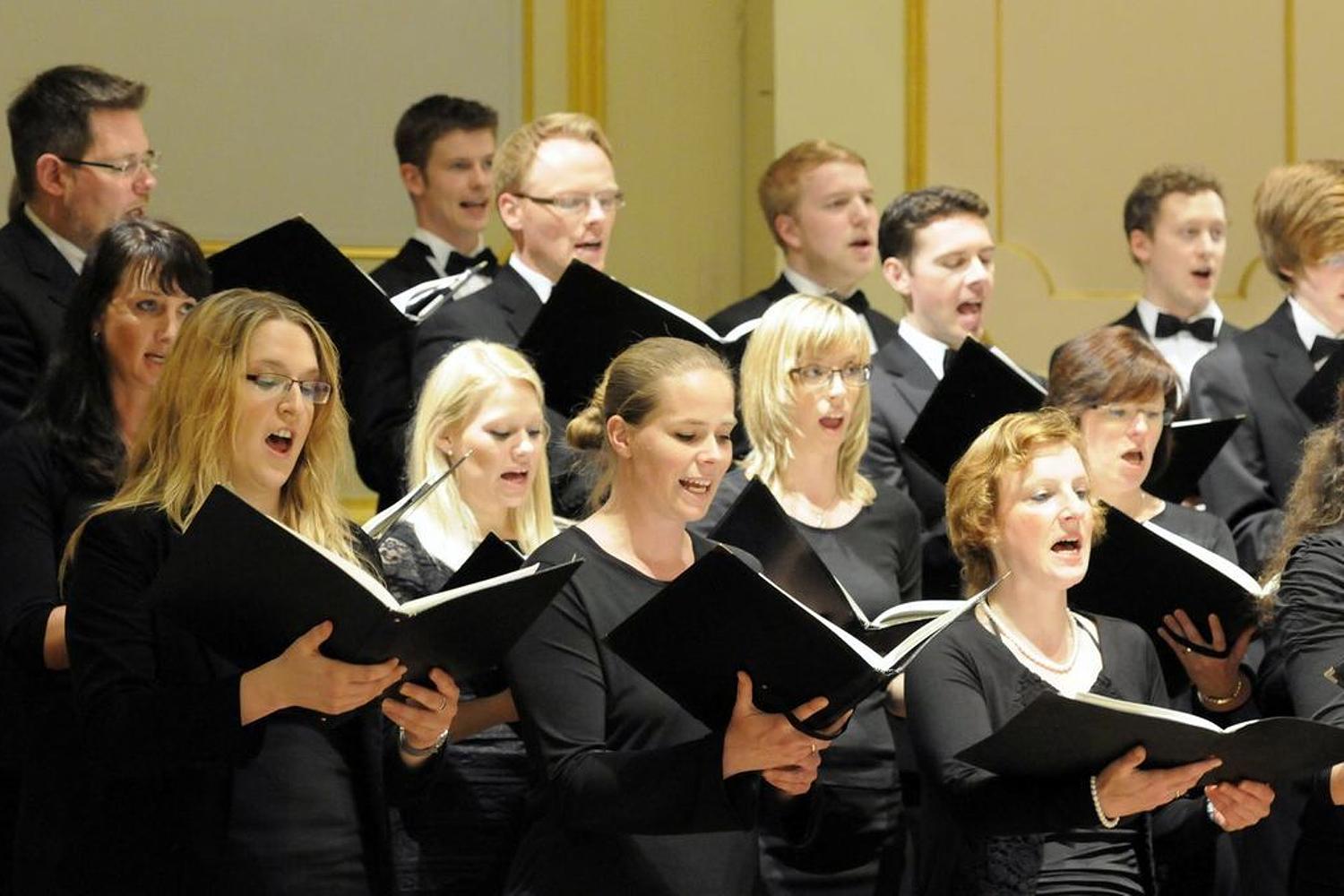 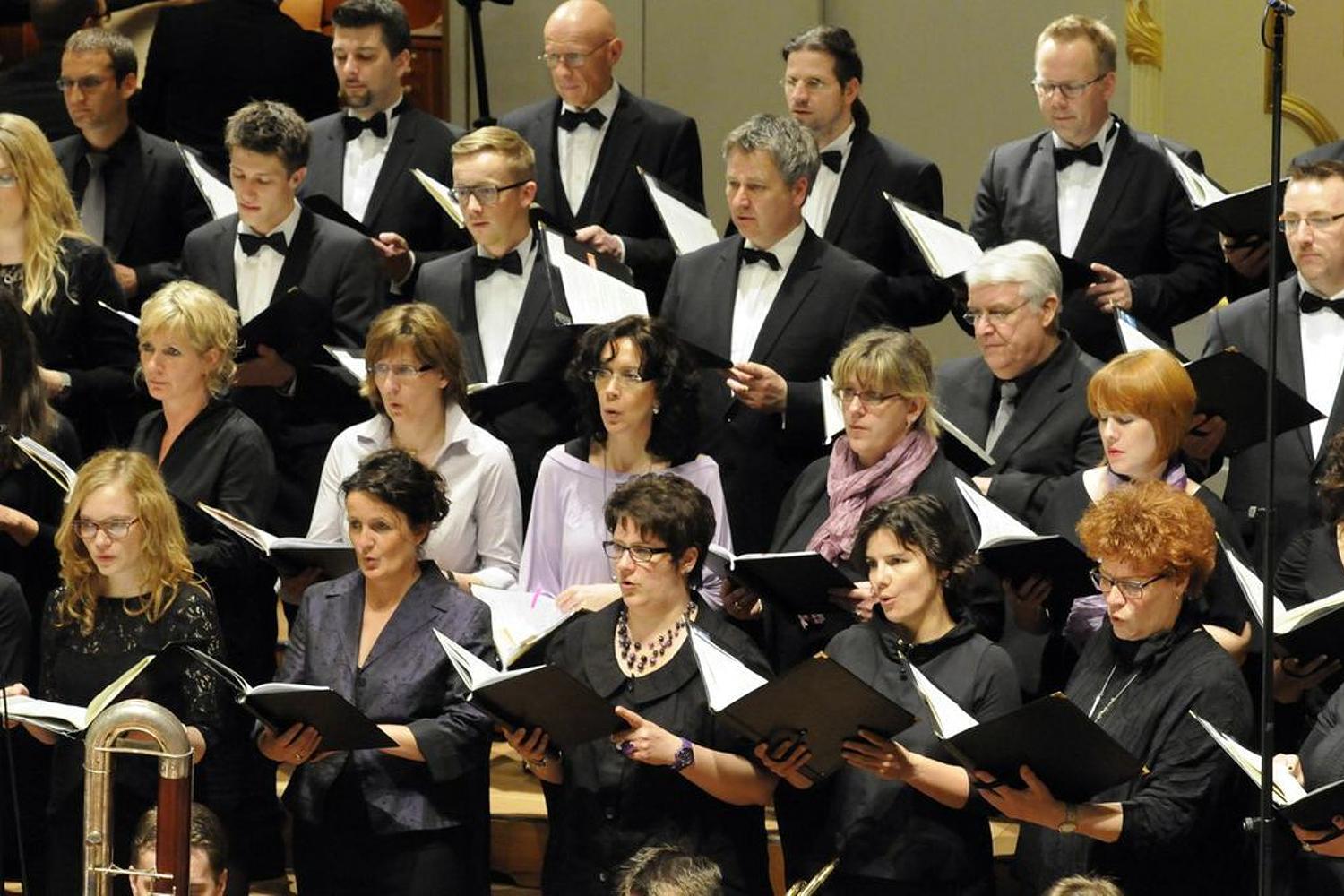