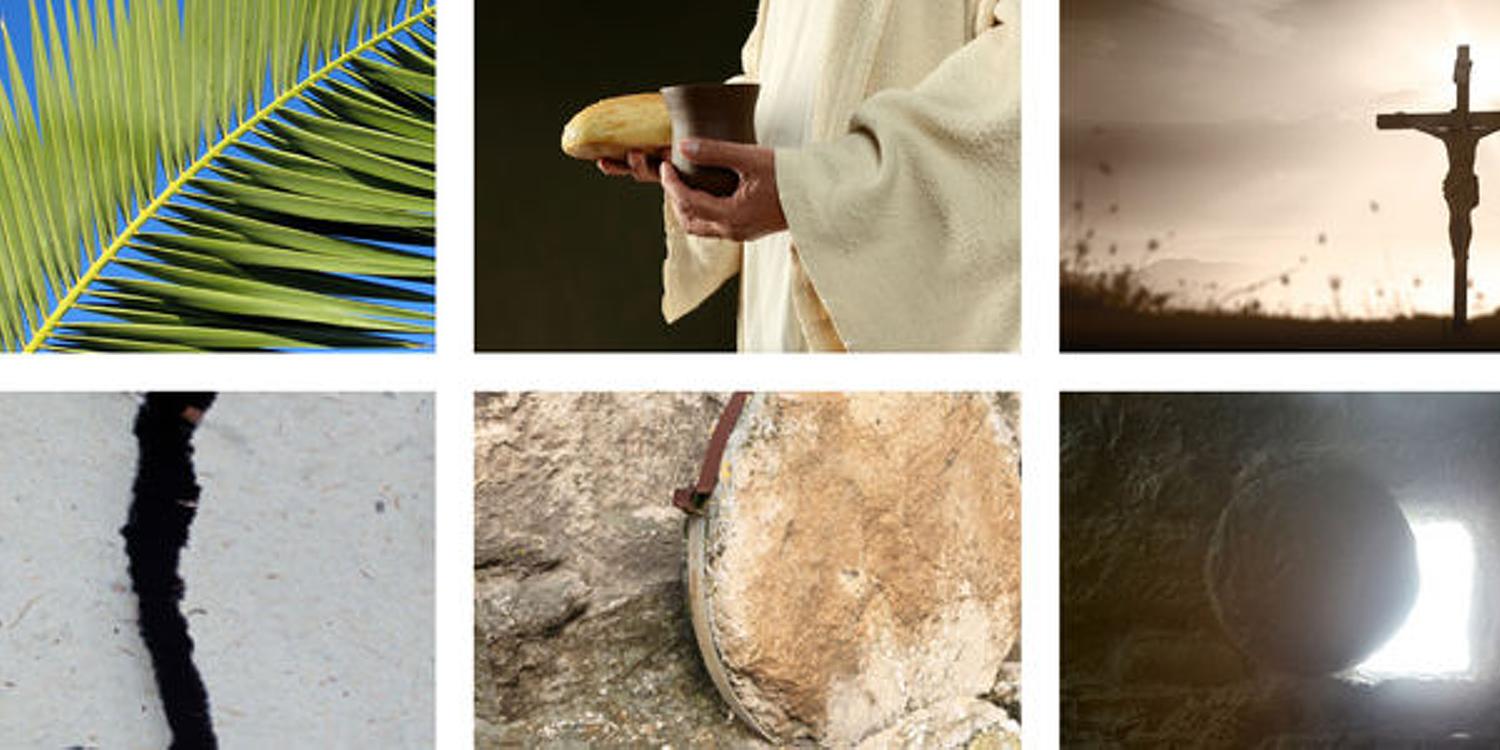 The events between Palm Sunday and Easter are full of suspense: a man is betrayed, scorned, accused, arrested, and killed. Jesus goes through hell and reaches heaven. A timeline from the Gospel of Mark.

It all begins on Palm Sunday, the Sunday before Easter. People are standing at the side of the road cheering Jesus Christ as He rides into Jerusalem on a donkey. It is a moving sight. Solemn. Festive. Loud. This is something people do not see every day. They acclaim their king, throw Him kisses, stretch their arms out to Him, and are full of good thoughts for Him. He is considered a miracle worker, a good preacher. He is one of them, a man of authority. Jesus lets them be. He knows that His hour has come. He spends the night with His friends in Bethany. He wants to rest. Bethany is a place where He finds peace and quiet before the storm.

On Monday Jesus goes to the temple. He sees all the commercial activity going on there, the buying and selling, and how the sanctuary is being desecrated. What a contrast! “Then Jesus went into the temple and began to drive out those who bought and sold in the temple, and overturned the tables of the money changers and the seats of those who sold doves. And He would not allow anyone to carry wares through the temple. Then He taught, saying to them, ‘Is it not written, “My house shall be called a house of prayer for all nations”? But you have made it a den of thieves.”’”

The day of reckoning. The chief priests and the scribes, together with the elders, confront Him, “By what authority are You doing these things?” This is certainly a legitimate question. Human, but understandable. For human beings whose lives normally follow certain structures, the answer is important. There is a public back and forth—the whole scale of human insecurity becomes apparent. What until then had been unequivocally clear is suddenly shrouded in doubt. There is uncertainty. Somehow nothing is as before.

This is the day the death sentence is passed. “And the chief priests and the scribes sought how they might take Him by trickery and put Him to death. But they said, ‘Not during the feast, lest there be an uproar of the people.’” And almost as if she were administering the last rites, a woman comes and anoints Jesus with costly fragrant oil. How extravagant! What a waste! No. Jesus says, “Why do you trouble the woman? For she has done a good work for Me. For you have the poor with you always, but Me you do not have always. For in pouring this fragrant oil on My body, she did it for My burial.”

The Passover has to be prepared, a final supper with the Lord: the Last Supper. This is followed by the betrayal and Jesus’ arrest. Gethsemane, the garden at the foot of the Mount of Olives, is where Jesus spends the last night before His death. Alone. Abandoned. If ever there is a moment when loneliness hurts, it is now. Gethsemane, which literally means “oil press”, is the scene of a gruesome night.

Early in the morning, the soldiers deliver Jesus to Pilate. “Are you the king of the Jews?” Jesus answers: “The words are yours.” As the chief priests and elders bring charges against Him, He says nothing. Only hours later He is nailed to the cross: “Now it was the third hour, and they crucified Him.” Blasphemy, scorn, and derision. The events take their course. Once someone is hung on the cross he is lost. In the afternoon, Jesus cries out with a loud voice, breathes His last, and dies. It becomes dark, the sun’s light fails. At the same time, the veil of the temple is torn in two from top to bottom, opening up the view of the Most Holy Place. In the evening they lay Him in a tomb.

It is the Sabbath. There is a dead silence.

The grave is empty. Jesus has risen. This certainly is the most important message for Christianity ever, something Christians simply have to talk about, even today!