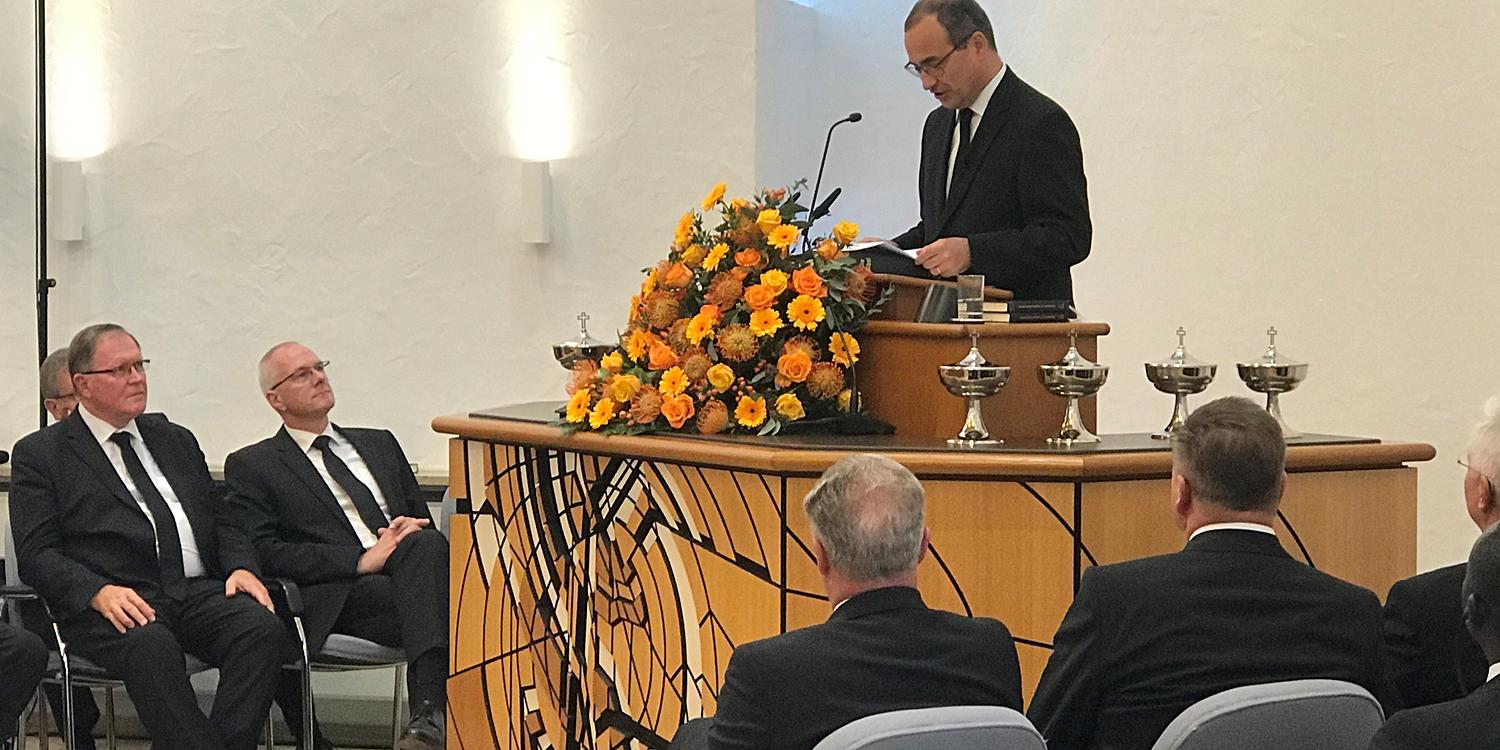 Zurich. A look back, the current status, and a look ahead to our new concept of ministry: for the first time, the international leader of the New Apostolic Church, Chief Apostle Jean-Luc Schneider, took a personal position on the ongoing deliberations.

“The development of our concept of ministry is an extremely important matter for the global Church,” said Chief Apostle Schneider this Sunday after a divine service for ministers, which was transmitted by video throughout Europe. “Our intention is to clearly and understandably define the ministries and ministerial structure, the various services, and leadership function.”

Between ordination and assignment

As the highest decision-making body of the Church, the District Apostle Meeting International (DAMI) has already established the broad strokes of the concept of ministry. Accordingly, the activity of the ministers is a service equipped with divine authority. The authority is exercised in the framework of a ministerial mandate, by way of which the Church leadership allocates a specific working area to the minister. As before, ministerial authority is issued through ordination.

At the last DAMI on Pentecost 2017, the focus of discussion was the subject of “leadership function”. While the spiritual leadership of the congregations, districts, and regions is exercised by ordained ministers, this function is not associated with spiritual authority. For this reason, such tasks will in future only be conferred by way of appointment—as a rule, by an Apostle. The appointment is received while kneeling.

In addition to the leadership functions there are still other spiritual services that are not necessarily associated with a ministry, for example, teaching activities. Such services will in future be bestowed by a leading minister through assignment. Here a blessing will be requested for the fulfilment of this duty. All of these decisions are presented and explained in the upcoming Special Edition 4/2017 of the minister magazine “Divine Service Guide”.

The effect of these decisions on the Apostles has already been determined: District Apostles have a special leadership responsibility and will thus be appointed to their service in future. By contrast, Chief Apostle Helpers and District Apostle Helpers will be assigned. The Chief Apostle, however, will continue to be ordained because he exercises the office of Peter and administers the authority of the keys, thereby executing the leadership function over the global Church.

The Chief Apostle made it clear that the distinction between spiritual ministry and leadership function will also have implications for the priestly ministry. He posed the question of whether the present hierarchical structure is still appropriate to the current needs of the Church. “It is my conviction that we need clearly defined responsibilities, firmly delineated tasks, and—above all—greater flexibility, more than ever!”

“In the coming months we will occupy ourselves first with the priestly ministry and then with the Deacon ministry,” announced the Church leader. “The ordinations that were performed previously are and remain fully valid! We are not going to turn our Church upside-down!” Further questions—such as whether women can occupy a ministry—can only be answered once this fundamental structure has been clearly defined.

One very practical decision has already been made. It has to do with officiating divine services. To date, this responsibility was basically earmarked for the “highest ranking” local minister. “Since all priestly ministries have been accorded the same ministerial authority, it is actually not necessary to take the ministerial hierarchy into account when it comes to officiating divine services.” For this reason, Priests can in future conduct the divine service even in the presence of the rector, for example. The decision will be up to the individual District Apostles to implement.

“As Chief Apostle, it is a sacred duty for me to steer this decision-making process and to ensure that these resolutions can unfold in blessing for the global Church,” said Jean-Luc Schneider. “I can understand that impatience may arise here and there, but I insist that we do a thorough job in this matter. This will naturally require some time, but it is indispensable for the unity of the Church.”

For further remarks of the Chief Apostle and the resolutions of the District Apostle Meeting, please visit the nac.today news portal. 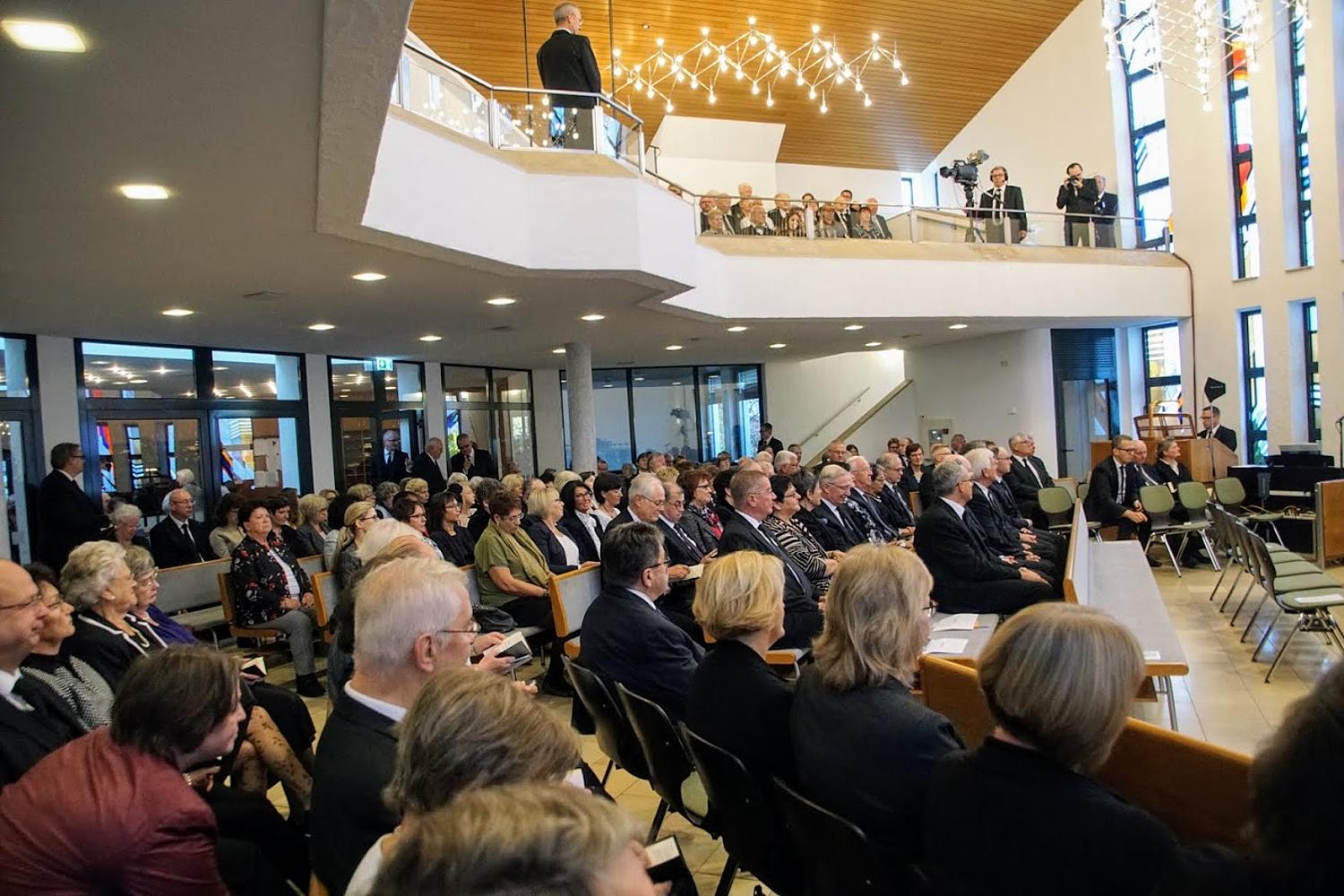