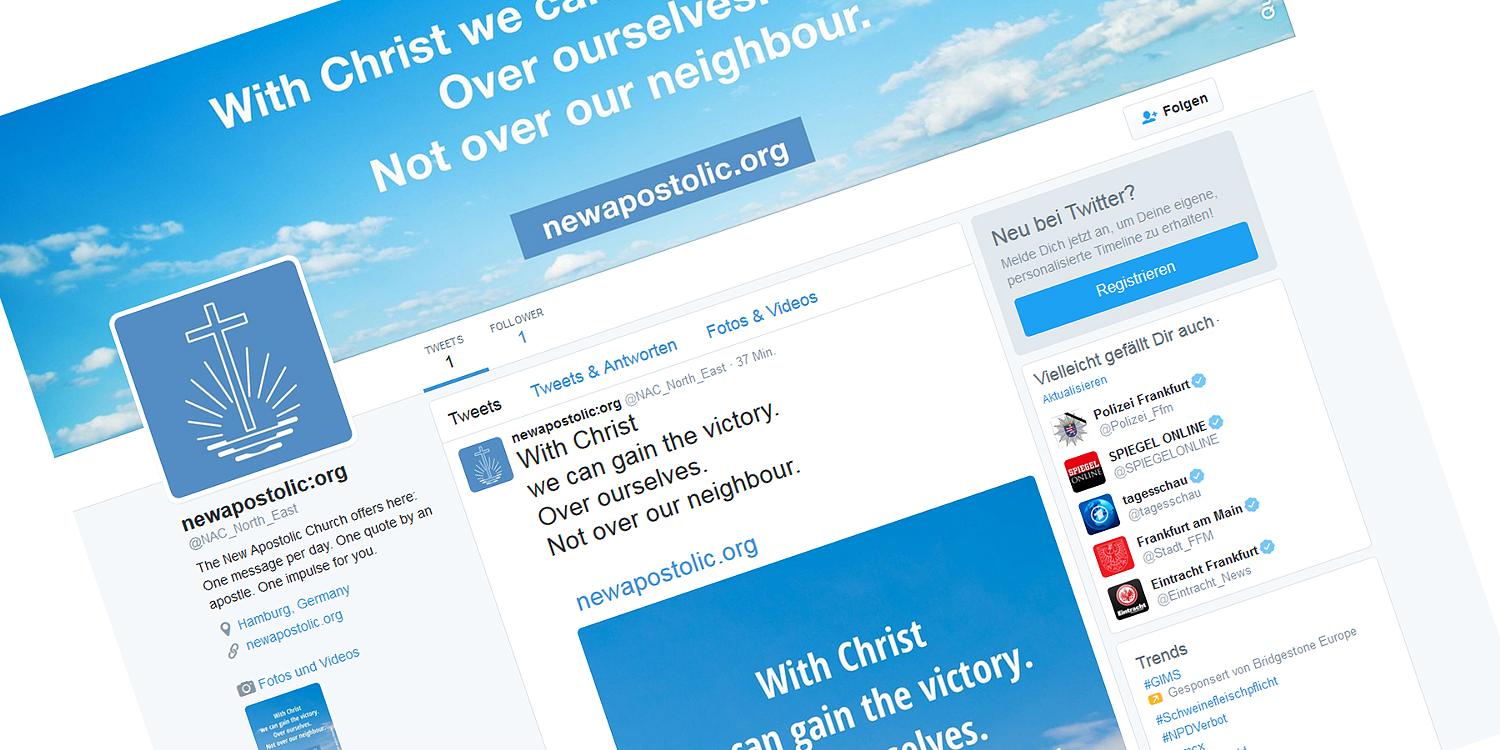 Quotes from Apostles in social networks

The New Apostolic Church is starting a new project: every day starting 1 March 2016, it will share striking statements from sermons over social media. These will be published in German and English on neuapostolisch.de and newapostolic.org, as well as on Facebook, Twitter, Instagram, and Pinterest. Spearheading the project actively here is the New Apostolic Church of Northern Germany.

The sermon takes on a high priority in divine services of the New Apostolic Church: "There we hear God's word and will, and there people can clearly see what New Apostolic Christians believe, how we are, and how we tick," says Bjorn Renz, leader of the Social Media Pilot Project in the District Church of Northern Germany. Beyond that, divine services are public. "The sermon is the word of God, and that is something of concern to us all."

For some months now, Björn Renz—formerly the creative director of an international communications and advertising agency—has been occupying himself with the question of how the Church might develop a greater presence in social media—and with what content. This is because its activities have, until now, been mostly confined to disseminating various news items on the Church's websites. Beyond that, the Chief Apostle and some District Apostles maintain their own Facebook pages, by way of which they stay in touch with the members and inform them about their activities.

The new website, which contains quotes from sermons, is based on the template of similar projects such as mademyday.com, in which humorous statements or key points are incorporated into a picture design and published. It is particularly the humorous or emotional posts that are "liked" and shared by thousands in the various social networks.

Sources are the Chief Apostle and District Apostles

"Why not just share a powerful message from a sermon?" suggested Björn Renz. The target group of neuapostolisch.de is not necessarily confined to New Apostolic believers, but rather encompasses all Christians, and even the interested public. Sources for the start will include divine services from the Chief Apostle and District Apostles.

Is the difference between these statements and Bible passages and other statements great enough for them to stand out in our fast-paced and fleeting media consumption? "We do not know that yet," he acknowledges, "but one thing is certain: we will definitely not stand out if we don't start anything new at all for fear of not being seen and heard!"

Standing out is not the only criterion, according to Björn Renz, who has also shared responsibility for the annual poster displays of the Work Group Public Relations Work in Europe since 2013. "In terms of design and content, the first question is always: what comes from our brand? What fits with our brand? In other words, what fits with the New Apostolic Church? "So it was that we finally decided to choose less conspicuous images of the sky—but those that match with our Church branding—as backgrounds for these quotes. And now maybe will stop hearing that our NAC-blue is cold, but instead as blue as the sky."

In two languages on the website and four channels

Mission of the Church as overarching goal

On neuapostolisch.de and newapostolic.org it will also be possible to share specific quotations on the pages of the social networks, download them, or send them to friends by e-mail. "Sharing, liking, and commenting are expressly desired," says Björn Renz.

His measurable goal is to have around 6,000 fans on the German and English Facebook pages by the end of the year. His overarching goal: "Getting people interested in the New Apostolic Church, awaken curiosity about our divine services and sermons, and above all, fulfil a portion of the Mission of our Church! After all, where else can one better "reach out to all people" than on social networks?