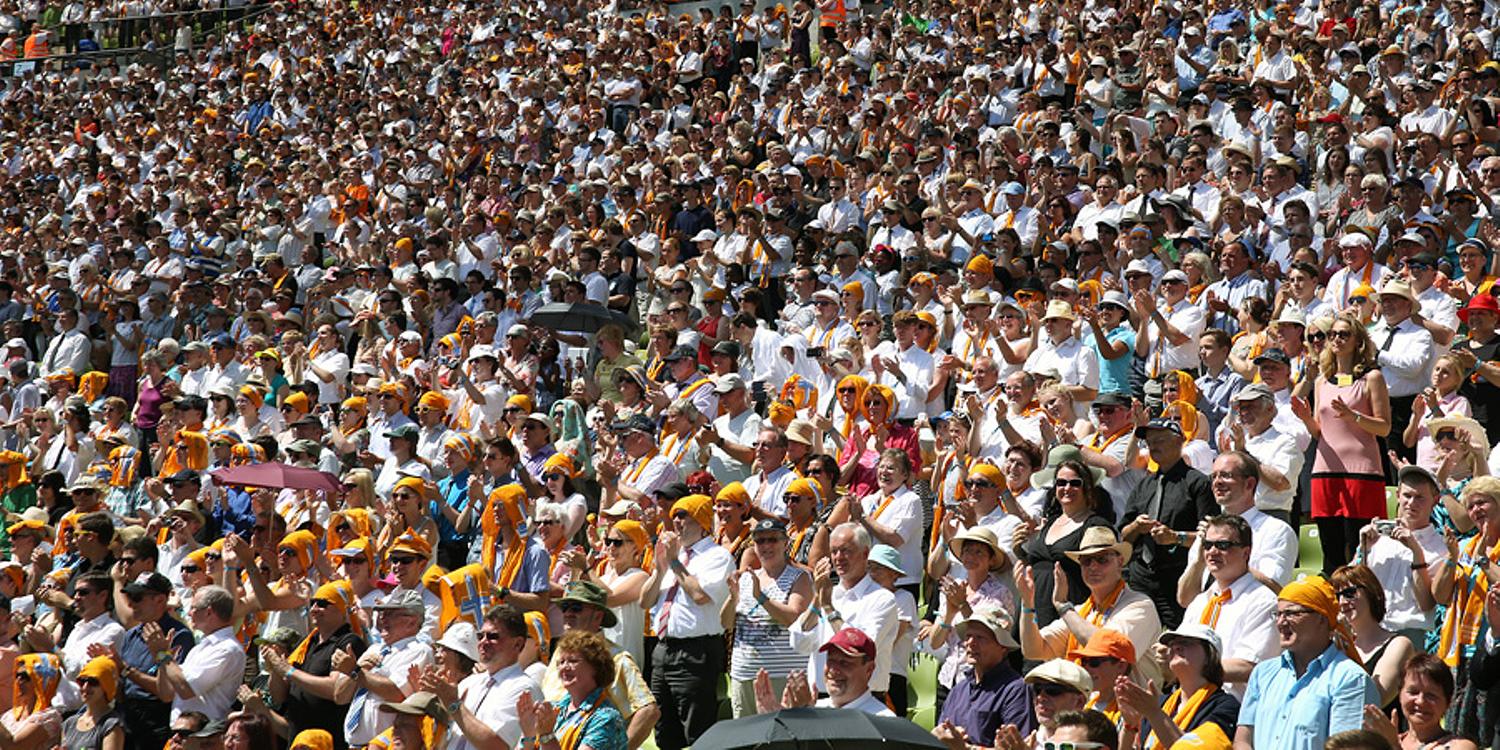 Pentecost 2014: “It is more blessed to give than to receive”

Munich/Zurich. A divine service from Munich transmitted around the world by satellite—millions of New Apostolic Christians on all continents witnessed the Pentecost service conducted by their Church leader, Jean-Luc Schneider. In the Olympia Stadium in the Bavarian capital alone there were 50,000 believers. In his Pentecost message, the Chief Apostle called upon the believers to become even more active in love for God and their neighbour, emphasising that “it is more blessed to give than to receive.”

The thermometer was holding steady at approximately 30 degrees Celsius when the closing divine service of the first International Church Convention began at 10:00 AM on Pentecost Sunday, 8 June 2014. Despite the high temperatures, the Olympia Stadium was filled with over 50,000 participants. The divine service was transmitted live via satellite to more than 100 countries around the world.

At the start of the divine service, Chief Apostle Jean-Luc Schneider recalled the motto for the year 2014: “Labour in love”. His appeal: “This is not merely a motto for a single year. To labour in love must be a firm component of our life of faith! Love is indispensable for our preparation to reach the goal of our faith as New Apostolic Christians, namely the return of Jesus.

The Church leader chose a Bible passage from Romans 5: 5 as the basis for the divine service and his sermon: “Now hope does not disappoint, because the love of God has been poured out in our hearts by the Holy Spirit who was given to us.”

“Your hope will not be disappointed”

In reference to the first part of the Bible passage, the Chief Apostle stressed that our hope in God will not be disappointed. “We hope in His return. We hope for salvation. We hope for His help. This hope is predicated upon the love of God. And Jesus promised mankind that no one would ever be able to separate them from the love of God.” Again the Chief Apostle repeated this promise: “Your hope will not be disappointed!”

In his sermon, he also illuminated the effects of God’s love. “Love has been poured out in our hearts, and it must continually grow.” For us as individuals, this means that we must always examine our hearts to see whether they are defined by love for God and our neighbour. “Our entire being must be permeated by our love for God and our neighbour.”

“It is more blessed to give than to receive”

On the subject of love, the Chief Apostle gave the believers a well-known Bible passage to take home with them: “It is more blessed to give than to receive” (Acts 20: 35). “After all, giving brings us nearer to God and into fellowship with Jesus Christ. Wherever the love of God is active, people are prompted to give—without the expectation of anything in return.”

As an example, the Chief Apostle referred to matrimony and family life. “Quite frequently in our time,” he pointed out, “marriage is nothing more than a fellowship of interests. Today it is often the case that couples only stay together for as long as each party still has an interest in doing so. Each one is expecting to receive as much as he or she gives. This is an unpleasant development.” Beyond that, he pointed out that it is the responsibility of parents to raise their children to have love for God and to help them understand, already in young years, that it is more blessed to give than to receive.

Consumeristic behaviour has no place in church!

The Chief Apostle went on to mention another specific example: “Here and there in congregational life there is also a tendency to adopt the consumerism that is often prominent in society, but consumeristic behaviour has no place in church!” It is the wrong approach, he pointed out, to look for results after every investment, and to expect that something will come back to us. “It is not a question of attaining a tangible result, but rather a matter of active love—without the expectation of anything in return,” he explained.

He also applied this message to the congregations in Africa and overseas countries in other continents. Often there is an expectation there that the Church must provide one thing or another, but what counts more than such an attitude of entitlement is the endeavour to give rather than take.

Thanks to all the helpers

At the end of the divine service, Chief Apostle Jean-Luc Schneider thanked all the helpers who had made the Church Convention possible in this form. With great applause, the 50,000 participants in the stadium paid tribute to the many volunteer workers who had helped along with the event. Even retired Chief Apostle Wilhelm Leber, who had stepped down on Pentecost 2013, took to the stage amid thunderous applause, and addressed a few words to listeners around the world.

The Pentecost service then concluded with the singing of the official song of the International Church Convention: “Singt ein Lied von Gott” [Sing a song of God”].

The Church Convention will go on until Sunday evening. At 6:00 PM, the booths of the various District Churches in Coubertin Square will close their doors. After that, the very first International Church Convention of the New Apostolic Church will become history. 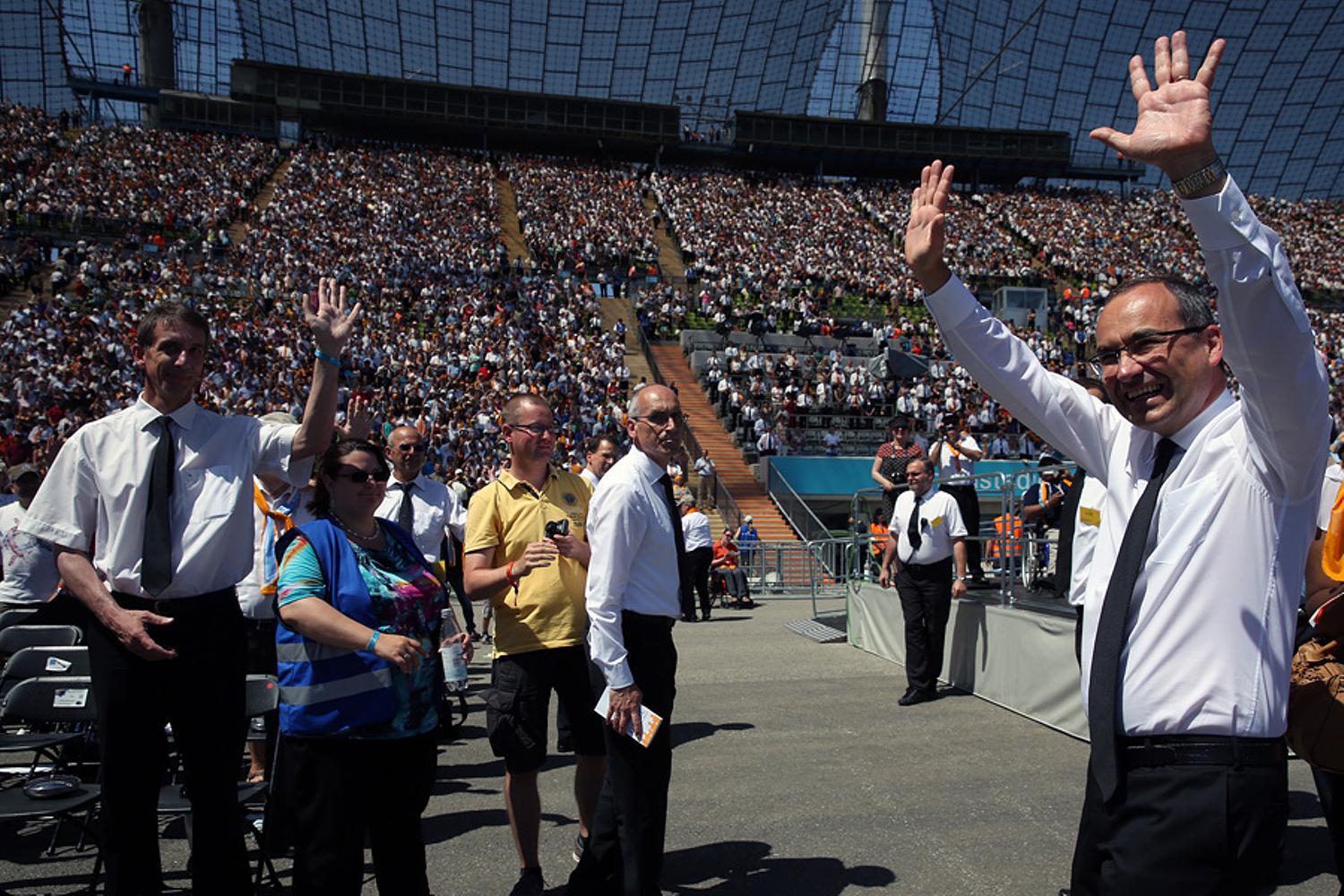 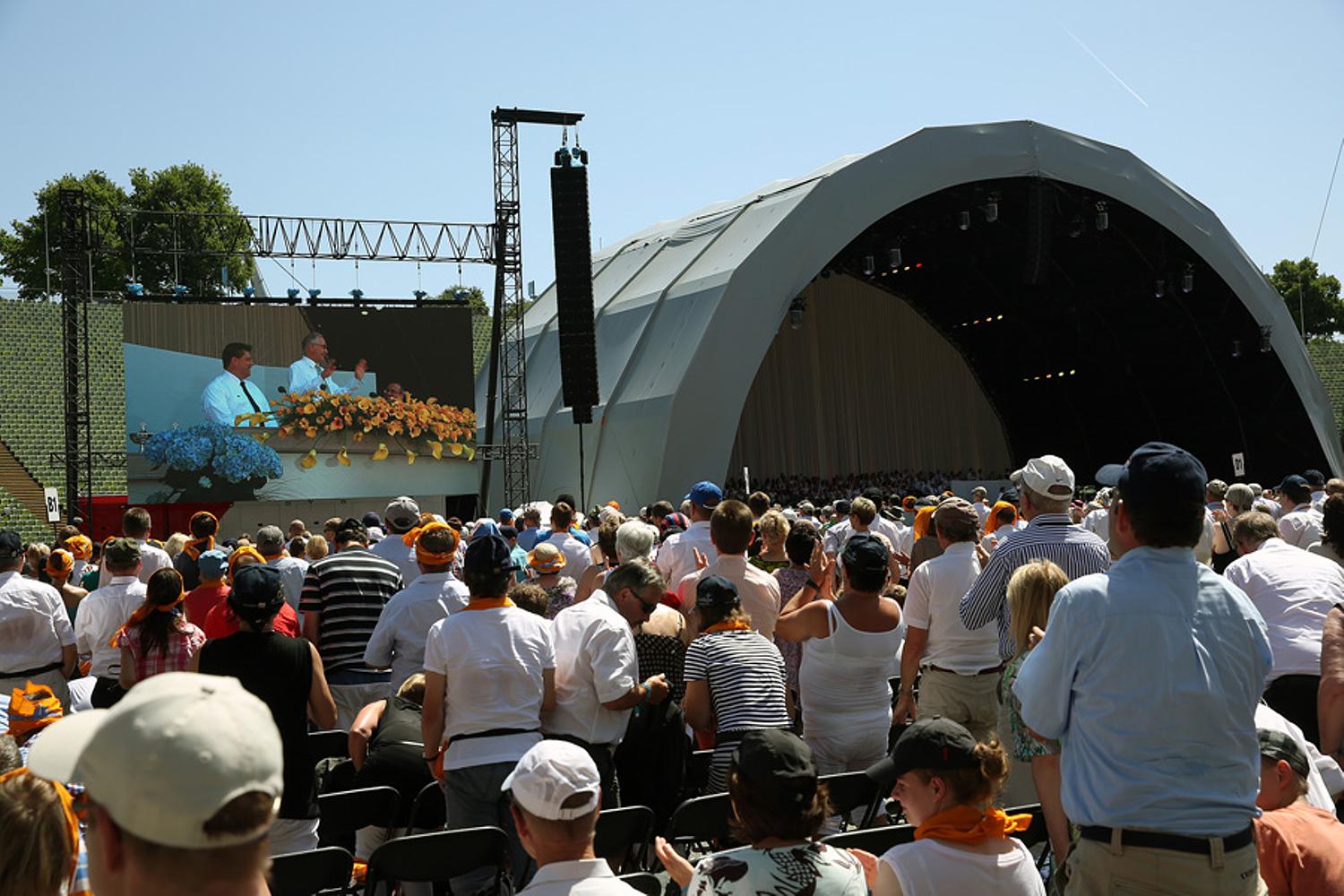