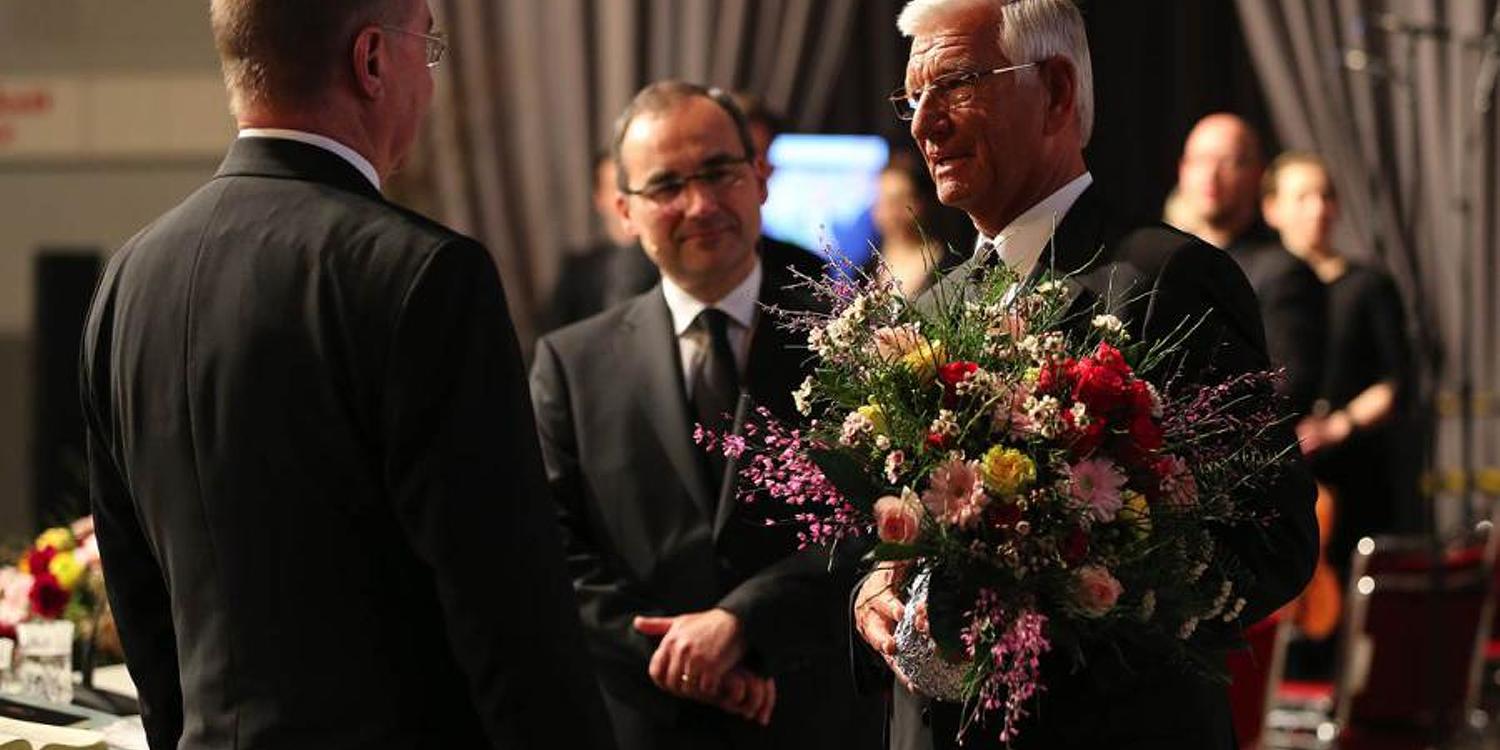 The name of the new District Apostle is Rainer Storck

Dortmund/Zurich. “We praise God and give thanks to His servant”—it was with this simple statement that the international leader of the New Apostolic Church, Chief Apostle Jean-Luc Schneider, opened Sunday’s divine service in Dortmund’s Westfalenhalle. With emotional words he retired District Apostle Armin Brinkmann, who had served in ministry for many years, before going on to ordain his successor, the new District Apostle Rainer Storck.

Chief Apostle Jean-Luc Schneider immediately identified three special aspects of yesterday’s divine service: first of all, it was a service in which both a retirement and an ordination would take place. This, he said, was always something special for the congregation involved. He went on to point out that the coming Sunday, 2 March 2014, would be the first service for the departed of the year 2014, and said that he wanted to prepare the congregation for this event. And finally, he expressed that this would also be a very  special personal experience for all because God always turns to each and every individual with the promise of new comfort and strength in every divine service.

The Bible text on which the leader of the New Apostolic Church based the divine service was taken from the doxology at the end of the Lord’s Prayer: “For Yours is the kingdom and the power and the glory forever” (Matthew 6: 13). “These words,” said the Chief Apostle, “describe all the essential elements of God: it is to Him that the kingdom belongs. He is the power, and He grants the glory—already today, but also in the future!”

The retiring District Apostle Armin Brinkmann was given the opportunity to express some words of thanks to the congregation as he served along. With a voice filled with emotion, he stated: “At the conclusion of my active time of office, I feel it important to emphasise that all glory and honour belongs to God.” His successor in ministry, District Apostle Rainer Storck, was also given an opportunity to address the assembled believers. The Chief Apostle then called upon District Apostle Noel Barnes, leader of the District Apostle district of Cape Town in South Africa, to serve along at the altar. The latter surprised the assembled congregation by beginning his address in the German language! He emphasised that God’s nearness to human beings has nothing to do with large numbers of people. All individuals are able to feel the power of God, even in their weakness.

Great joy in the congregation

The congregation was given much reason to be joyful. The international Church leader put the emphasis of this special divine service on the praise of God, belief in Jesus Christ, and obedience of faith. “Those who follow the Lord in this manner will experience God in His power and glory,” said Chief Apostle Schneider. “And this is not only a consolation reserved for the future, but can already be felt today in the here and now.”

About the District Apostles

District Apostle Armin Brinkmann (65) is one of the longest serving Apostles in the world: he received the Apostle ministry in a divine service on Pentecost 1983 in Hamburg. Over the ensuing years he was intensively involved in the founding and expansion of New Apostolic congregations in numerous countries both inside and outside of Europe, for example in Russia, Brazil, Angola, Singapore, and Sao Tomé e Príncipe. During the course of his time in ministry he undertook more than 400 intercontinental journeys.

The new District Apostle, Rainer Storck (56) comes from Kamp-Lintfort and today lives in Rheinberg with his family. Before entering into the full-time service of the Church, he worked as a graduate engineer and independent building contractor. In 2009 he was ordained an Apostle by the then Chief Apostle Leber and entrusted with the care of the western half of the District Church of North Rhine-Westphalia. In addition, he supported congregations in Albania, Armenia, Azerbaijan, and Georgia for over ten years.

Please read our detailed report on the website of the New Apostolic Church of North Rhine-Westphalia at http://www.nak-nrw.de/.

Some nice photos from the divine service can also be found in nacworld, the social network of the New Apostolic Church, at https://nacworld.net. 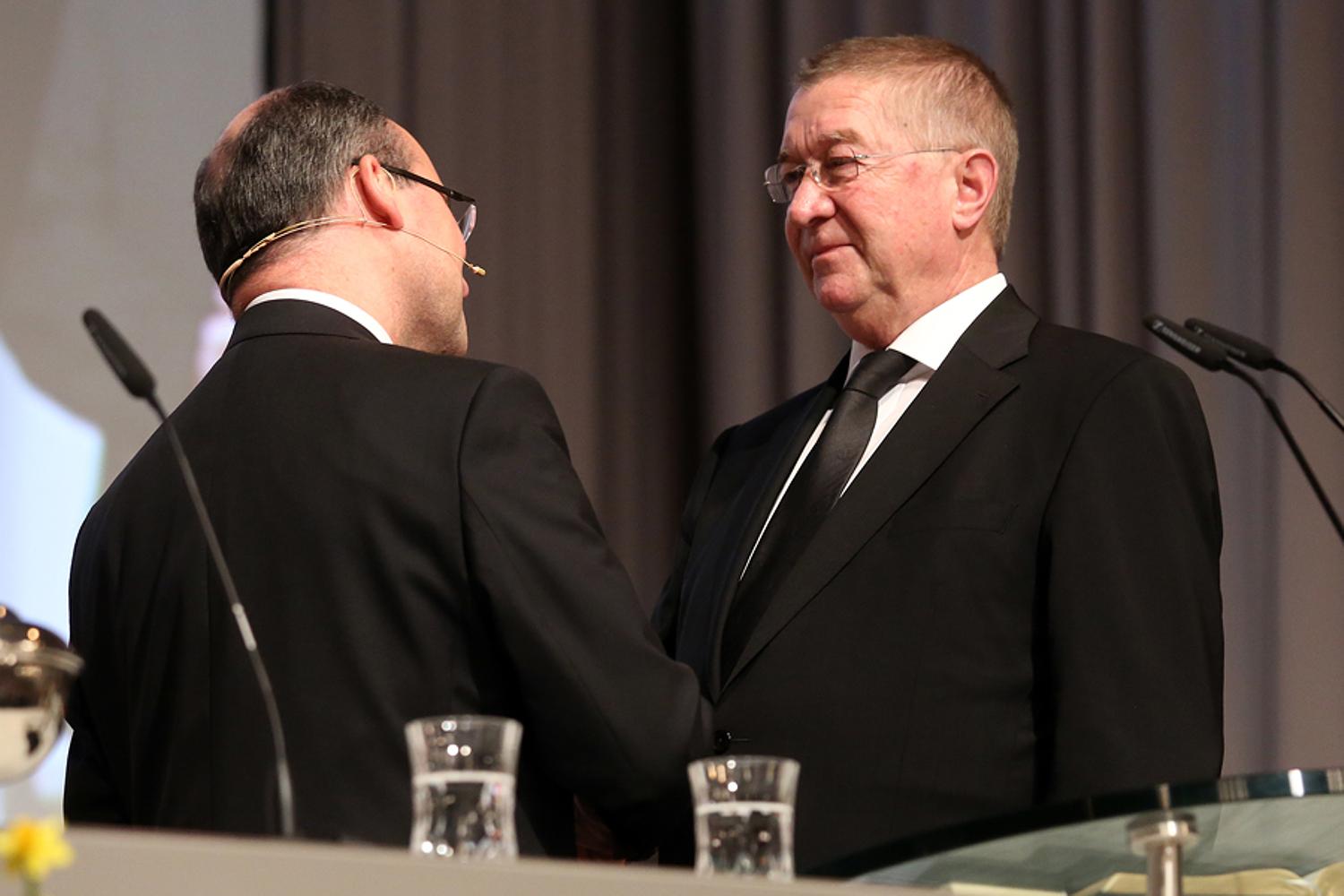 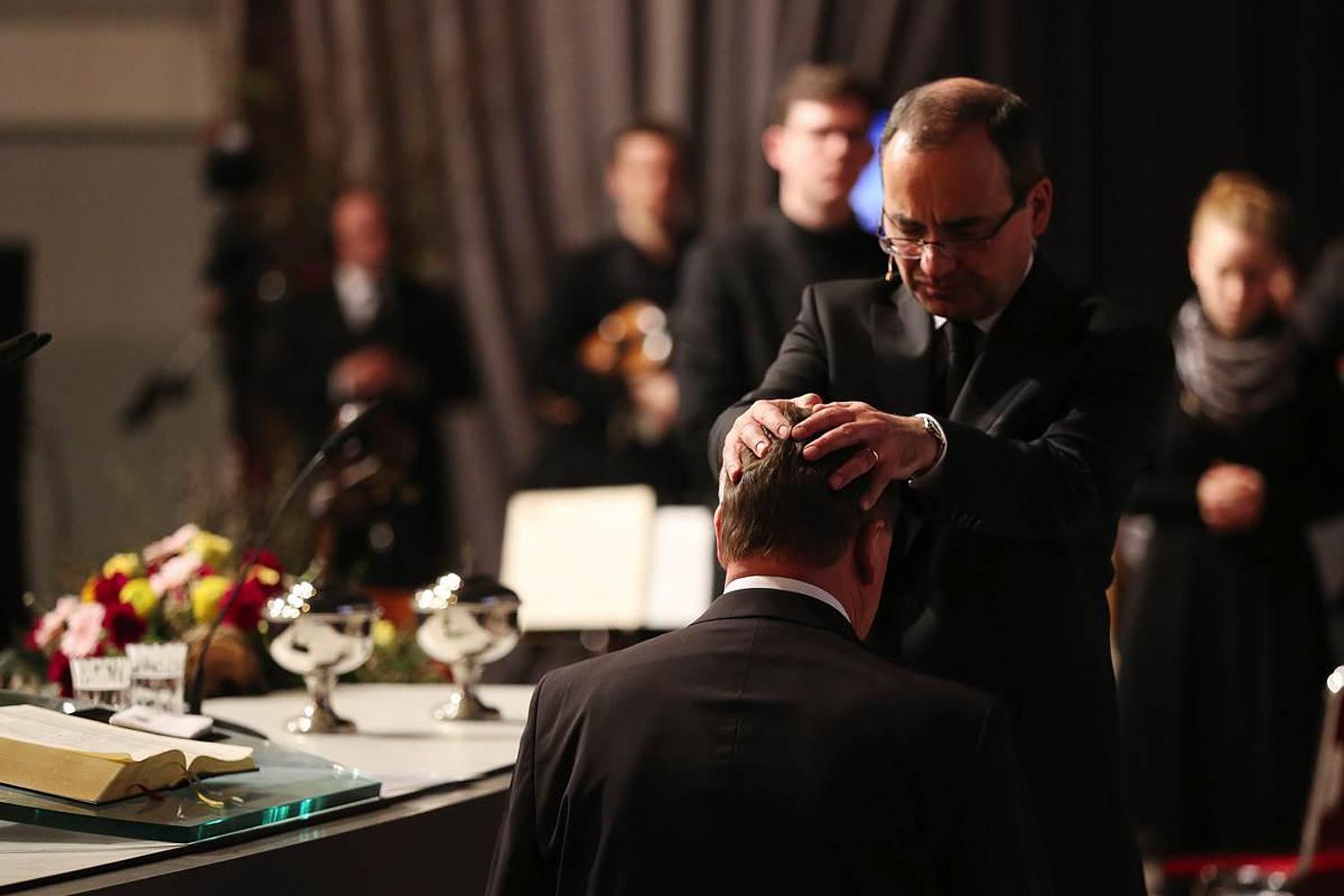