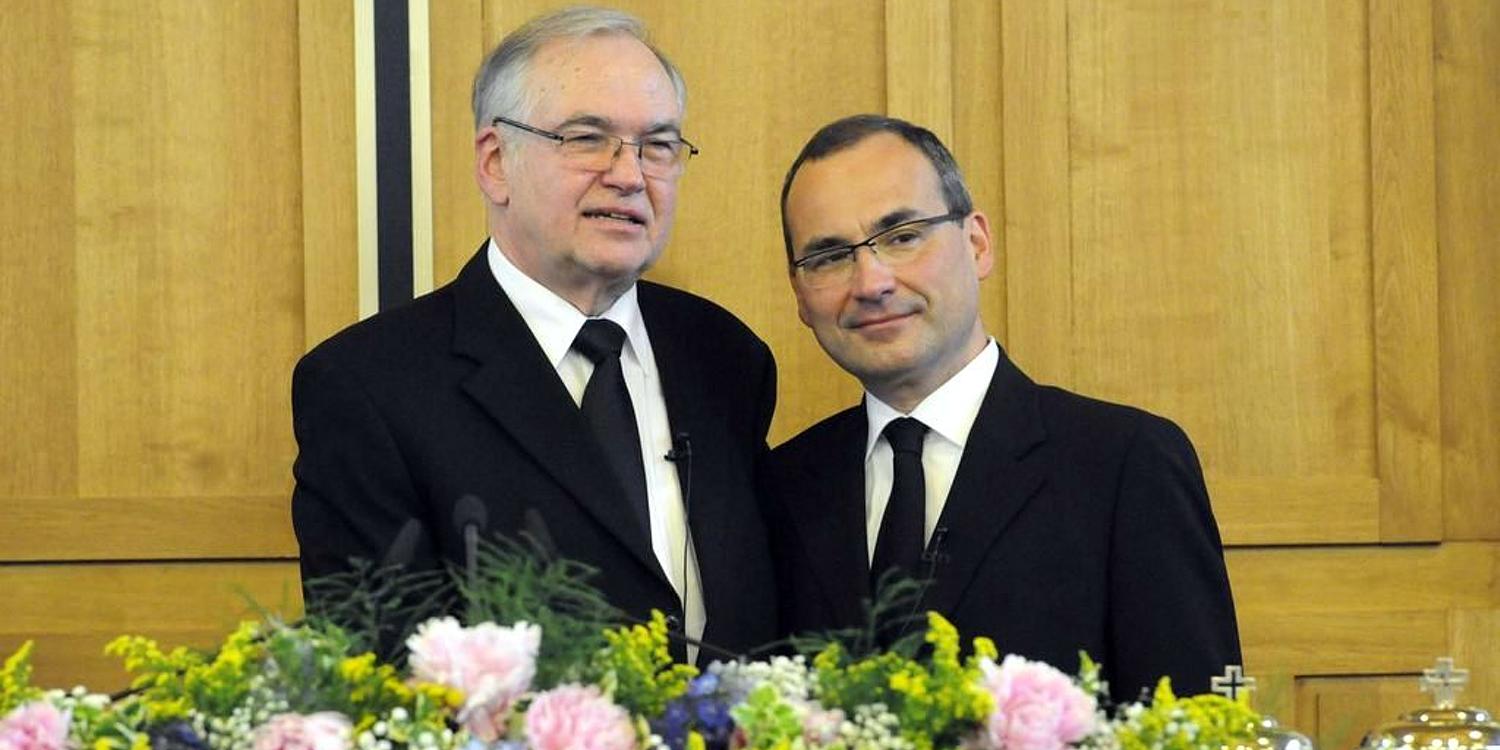 The New Apostolic Church celebrates its 150-year anniversary in the year 2013, which makes this year’s celebration of Pentecost a high point in the church year in two respects. Beyond that, the change in leadership that had been announced so long ahead of time also took place on this day: Chief Apostle Wilhelm Leber, who had reached the age of 65, retired after eight years in ministry as Chief Apostle. In 2005 Chief Apostle Richard Fehr had ordained him to this ministry in Stuttgart-Fellbach (Southern Germany) and commissioned him as his successor. Now it was Chief Apostle Leber’s turn to establish his successor.

Chief Apostle Wilhelm Leber had already taken his first step in this direction in the 2012 Pentecost service in Cologne.  It has now been a year since he introduced District Apostle Jean-Luc Schneider as his successor and appointed him Chief Apostle Helper. The latter has now had a year to prepare himself for his new mandate. Since then he has also gradually managed to entrust his previous responsibilities as leader of the District Churches of France and the Congo to others.

At the end of the Pentecost service on 19 May 2013, after the celebration of Holy Communion, Chief Apostle Wilhelm Leber invited his successor to the altar. “You are the rock for all New Apostolic Christians,” said Chief Apostle Leber, recalling the words of the Lord when He spoke to His disciple Peter (according to Matthew 16: 18): “On this rock I will build my church.”

The Chief Apostle ministry – the ministry of the rock

The retiring Chief Apostle then went on to briefly describe various aspects of the Chief Apostle ministry: “You are to be a rock—in other words you are to actively create the conditions that will allow the Lord to build His church.” The Chief Apostle is also responsible for ensuring that the foundation remains stable, that the doctrine remains clear and pure, and that everything is oriented toward heaven. “But you will also feel that you are surrounded by heavenly powers and the prayers of many faithful children of God,” he told the new Church leader.

Will you serve the Lord?

Finally the Chief Apostle put the question to his successor as to whether he would accept the Chief Apostle ministry and be a rock for his brethren in faith. “Will you love them all and carry them in your heart? And will you serve the Lord in this manner?” Visibly moved, the latter, who had been so addressed, responded with “Yes”. In the words of the ordination, Chief Apostle Leber asked God to give his successor much wisdom and strength. “Be the head of the Apostles. May the full power of the Holy Spirit have its effect within you!”

An expression of gratitude to Chief Apostle Fehr

Thereafter, Chief Apostle Wilhelm Leber turned to address the congregation and all other congregations around the world connected live by satellite and internet for one last time during his term of active ministry. He took this opportunity to express gratitude to his predecessor in ministry, Chief Apostle Richard Fehr, who could not participate in the service because of his failing health. “He was a true blessing bearer to me,” said Chief Apostle Leber.

He then went on to thank all the brothers and sisters: “I have felt an infinitely great deal of love from your ranks.” He also expressed his gratitude to all the Apostles, District Apostles, and all ministers for their support.

The new Chief Apostle Jean-Luc Schneider also addressed words of gratitude to his predecessor in ministry: “Over these eight years, you have served us in your wonderful manner. Under your leadership and thanks to your inspiration and direction, the Church was able to deepen and consolidate its doctrine.” All of this will go down in the history of our Church. Other examples Chief Apostle Schneider mentioned included the new Divine Service Guide and the new liturgy. “Your profound proclamation of the word inspired us. Your sermons left their mark upon us and strengthened us.”

Chief Apostle Leber also had a special heart for the youth. Examples of this included the European Youth Day 2009 in Düsseldorf and the many regional youth weekends in which he took part. “You managed to inspire the young people for Jesus Christ and His work.” Chief Apostle Schneider also made reference to Leber’s initiative in establishing other District Apostle districts and his support for combating AIDS in African countries. “We always admired your diligence and were always grateful for your nearness and open conversations,” said Chief Apostle Schneider, expressing the sentiments of all the District Apostles as well.

Gratitude on behalf of millions

After these words, he relieved Chief Apostle Wilhelm Leber from his commission and responsibility as Chief Apostle, and discharged him into retirement. “You will forever remain our Chief Apostle,” he promised, adding that his handshake was representative of many millions of members around the world, and that it contained gratitude for everything—including thanks to his wife and family. “We wish you the blessing of God and ask you for your continual love, powerful prayers, and wisdom.”

The new Chief Apostle went on to add that his agenda is recorded on the first page of the Catechism of the New Apostolic Church: the New Apostolic Church is to be “a church in which people feel at home and, inspired by the Holy Spirit and their love for God, align their lives to the gospel of Jesus Christ and thus prepare themselves for His return and eternal life.” 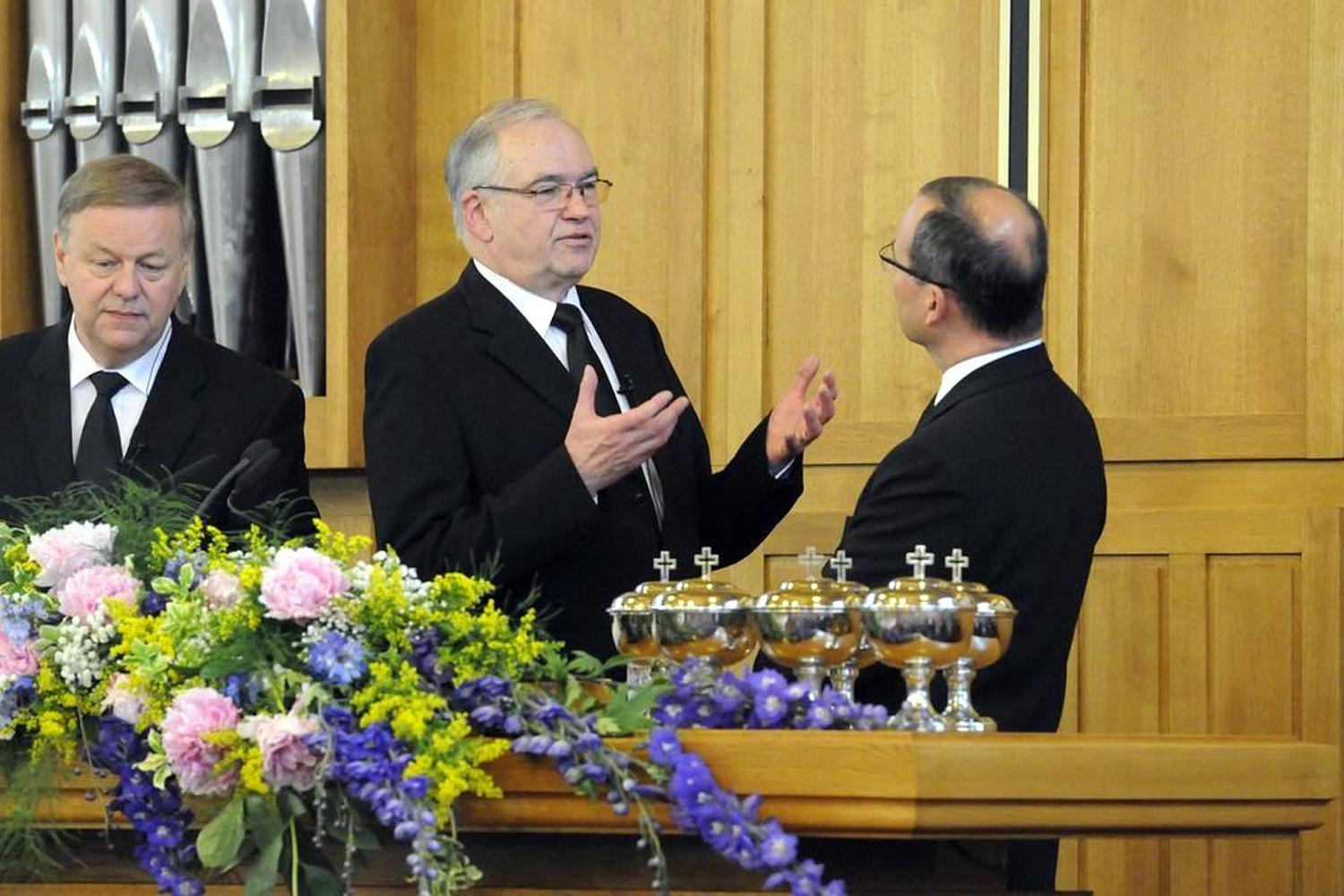