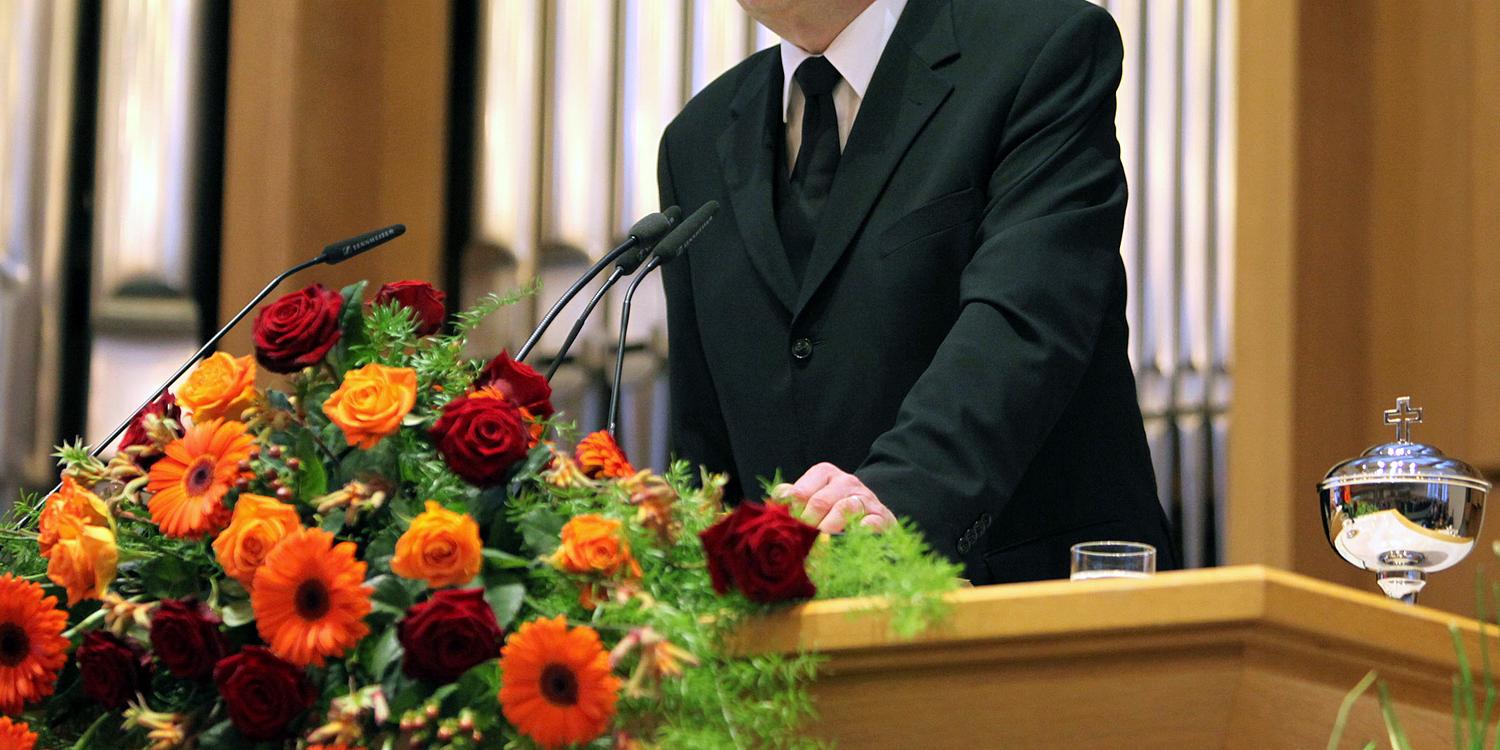 “To believe means to leap upward!”

Zurich/Dortmund. The festive divine service of this past Sunday marked the close of the spring meeting of the international leadership of the New Apostolic Church. Chief Apostle Wilhelm Leber, who had come to the large congregation of Herne-Wanne-Eickel together with 18 District Apostles and 11 District Apostle Helpers from around the world, explained his definition of belief to the over 1,000 attendees in the divine service. “To believe means to leap upward - to the Lord!” said the Church leader.

It was an impressive picture that even a large District Church such as North Rhine-Westphalia does not get to see very often: all the District Apostles and District Apostle Helpers of the world were seated together at the altar. Only one of their number was absent: District Apostle Shadreck Lubasi from Kenya had been prevented from coming. Chief Apostle Leber made good use of the international team at his disposal by calling District Apostles Noel Barnes (Cape Town, South Africa), Markus Fehlbaum (Switzerland), Guillermo Vilor (Brazil), and Leslie Latorcai (Canada) to the altar to serve along. The large festive congregation was delighted to experience something of the global nature of the international New Apostolic Church.

A greeting to the handicapped

At the start of the divine service, the Church leader drew special attention to the many handicapped members and their families within the Church. He had recently learned that 21 March had been designated as “Down Syndrome Day”, and for this reason had decided to especially acknowledge those “who must lead a special life”. It was to this group that he addressed the following words from the book of Isaiah: “Comfort, yes, comfort My people!” (cf. Isaiah 40:1).

After this introductory message of empathy, Chief Apostle Leber elaborated on the Bible text on which the divine service was based: “Who is he who overcomes the world, but he who believes that Jesus is the Son of God?” (1 John 5: 5). “What does it mean to believe?” he asked the assembled congregation. “To believe means to leap upward, namely to the Lord! Belief has to do with change and movement,” said the Church leader. “Belief influences our ideas and intentions,” he went on to explain, “which is more than what happens when we just consider something to be true. Belief also signifies accepting God’s ways. Those who believe in this manner will indeed overcome the world.” Chief Apostle Leber did not merely describe the “world” as a series of outward factors surrounding us as human beings, but went on to specify that it was also comprised of various inner attitudes that run counter to the divine standards.

The divine service on Sunday brought the International District Apostle Meeting - which had been convened in Dortmund from 17 to 21 March - to its conclusion. The District Church of North Rhine-Westphalia not only served as host, but was also the beneficiary of some rich gifts: on Wednesday, 17 March, the Church leaders thronged into a large number of congregations throughout the federal state in order to conduct a series of international divine services.

Over the two-day session, the District Apostle Meeting dealt with topics of an international scope. Since the New Apostolic Church is currently working on its own exhaustive catechism, many of the items on the agenda were of a theological nature. So it was that articles dealing with Holy Communion and our understanding of church were discussed. We will report on these topics elsewhere.

You can find further background reports on the website of the New Apostolic Church North Rhine-Westphalia. 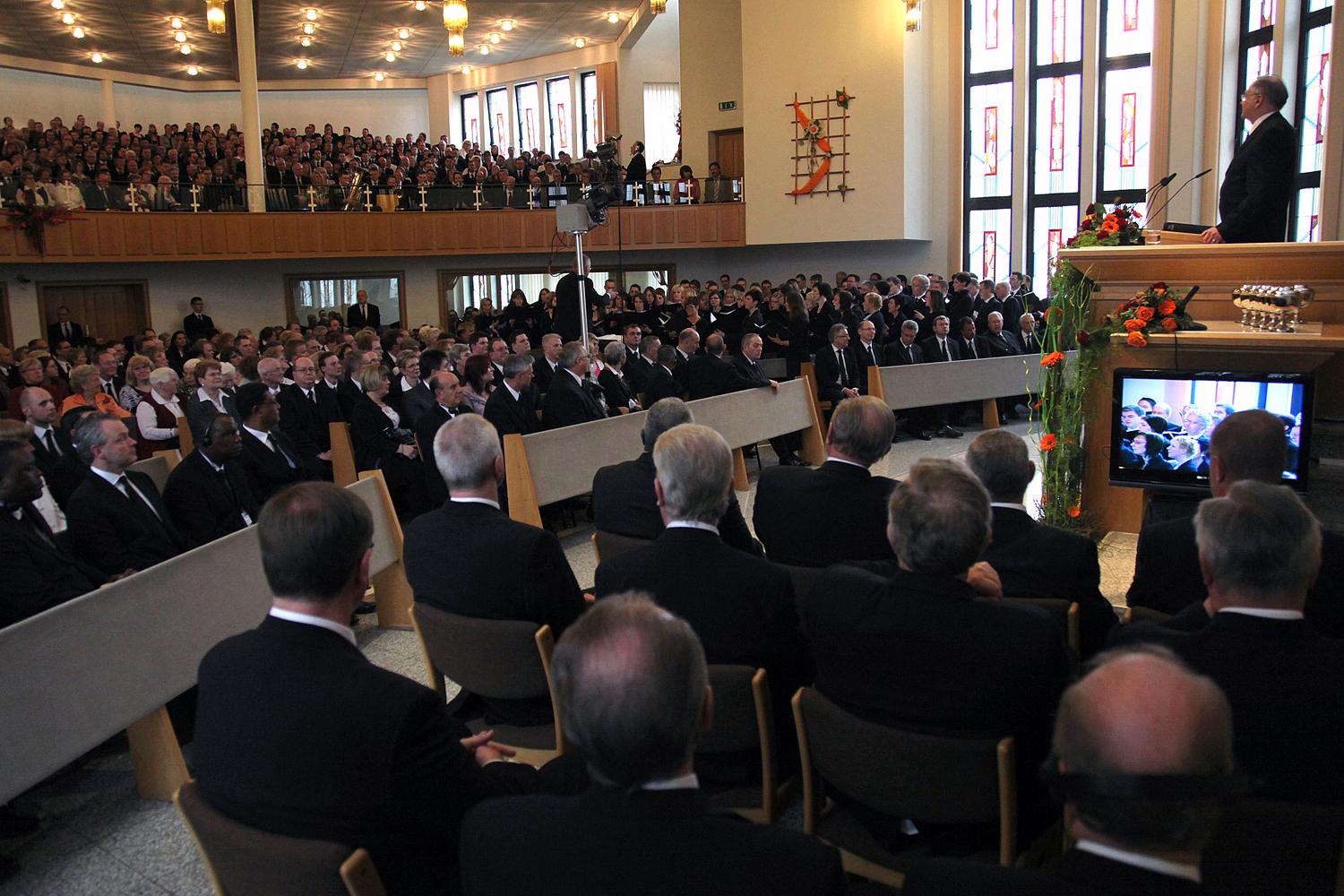