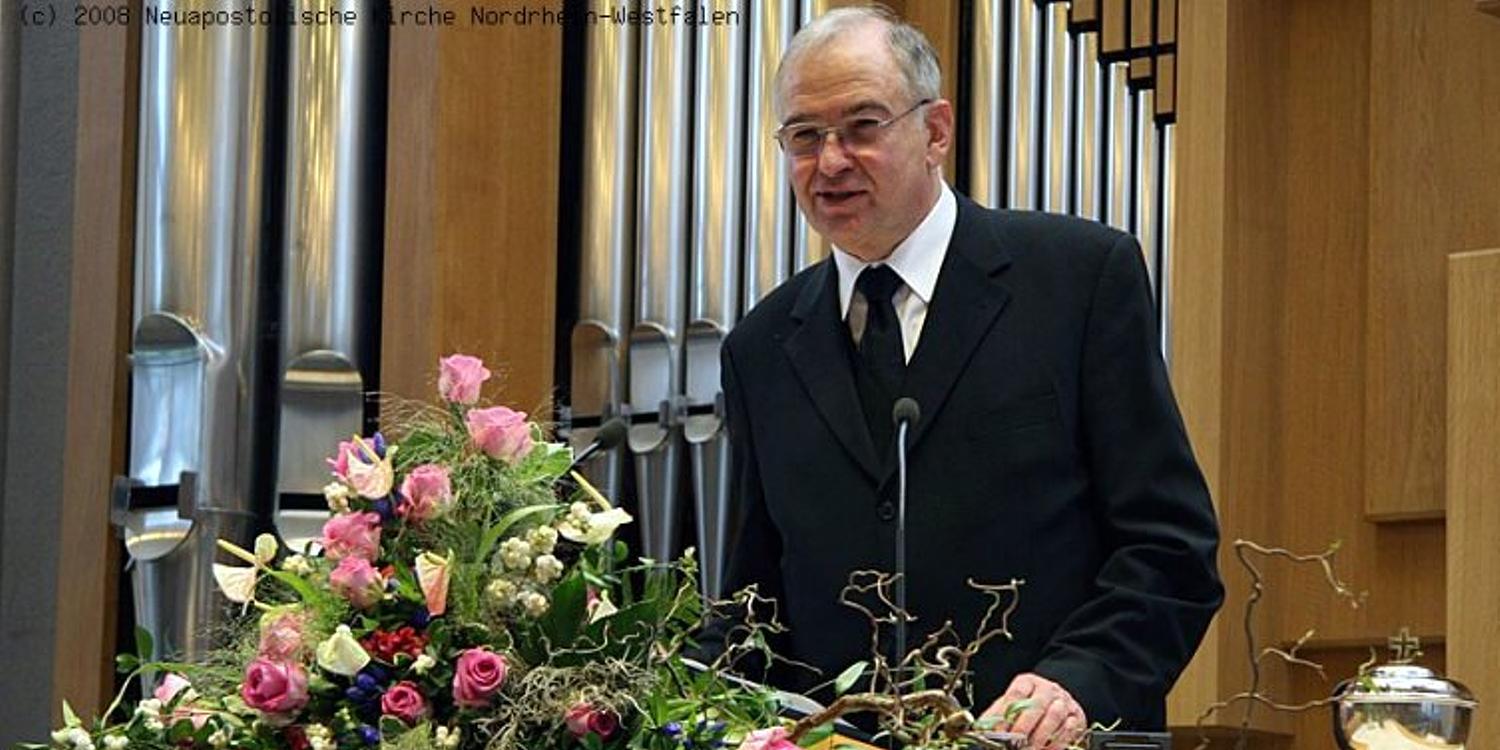 “I am striving for a kind of reconciled partnership”

Zurich/Herne. Last Sunday, 28 September 2008, Chief Apostle Wilhelm Leber assembled the European ministers of the New Apostolic Church, along with their wives, for a special divine service. A satellite signal carried the service from the church in Herne-Wanne-Eickel (North Rhine-Westphalia) into over 550 congregations throughout  Europe (we reported). At the conclusion of the divine service, the international Church leader read out six points of special importance to him.

“We remain Apostolic, i.e. a Church that is led by Apostles,” emphasised the Chief Apostle. But as far as he is concerned, the Chief Apostle went on to say, this does not mean that the congregation is to remain passive. On the contrary, in the words of Apostle Paul in 1 Corinthians 12: 27, he called upon the brothers and sisters to continue helping along.

The ideal scenario for a congregation is that all are active “for the benefit of all”, and that this occurs in harmony with the ministers. “In practice this can certainly lead to tensions from time to time between ministers and brethren who would like to help along.” In such cases, the foremost minister of the New Apostolic Church urged his listeners to engage in dialogue.

“I feel it is important,” said Chief Apostle Leber, “to emphasise the collaboration of our members even more than in the past. Many of our sisters are active in instructing our children or in caring for our young people. Could these sisters not be introduced to the congregation once in a while, for example during the New Year’s Eve divine service?”

The Chief Apostle considers it one of the main focuses of congregational work to see to it that no one becomes inactive, and to create an environment where inactive members can come back into the fellowship. “Thus our efforts must centre particularly on the youth and even the children already.” He also recommended working with a view to the outside world and proclaiming our faith to our surroundings, even if this has become more difficult in our day.

The Church president also addressed his efforts to reconcile with other Apostolic denominations: “I would like to emphasise once again, also in this circle, that I would like to come to reconciliation with the United Apostolic Church (UAC). I think it is appropriate to move forward in small steps. Of course this requires time. I am striving for a kind of ‘reconciled partnership’ and not an amalgamation of the churches.”

In conclusion Chief Apostle Leber made another pitch for the European Youth Day scheduled for May 2009. He said he had become convinced over the last few days that the fair grounds in Düsseldorf will be an ideal location for this encounter with the young people. He asked all the participants of the divine service to support the weekend of 21-24 May 2009 to the best of their ability.