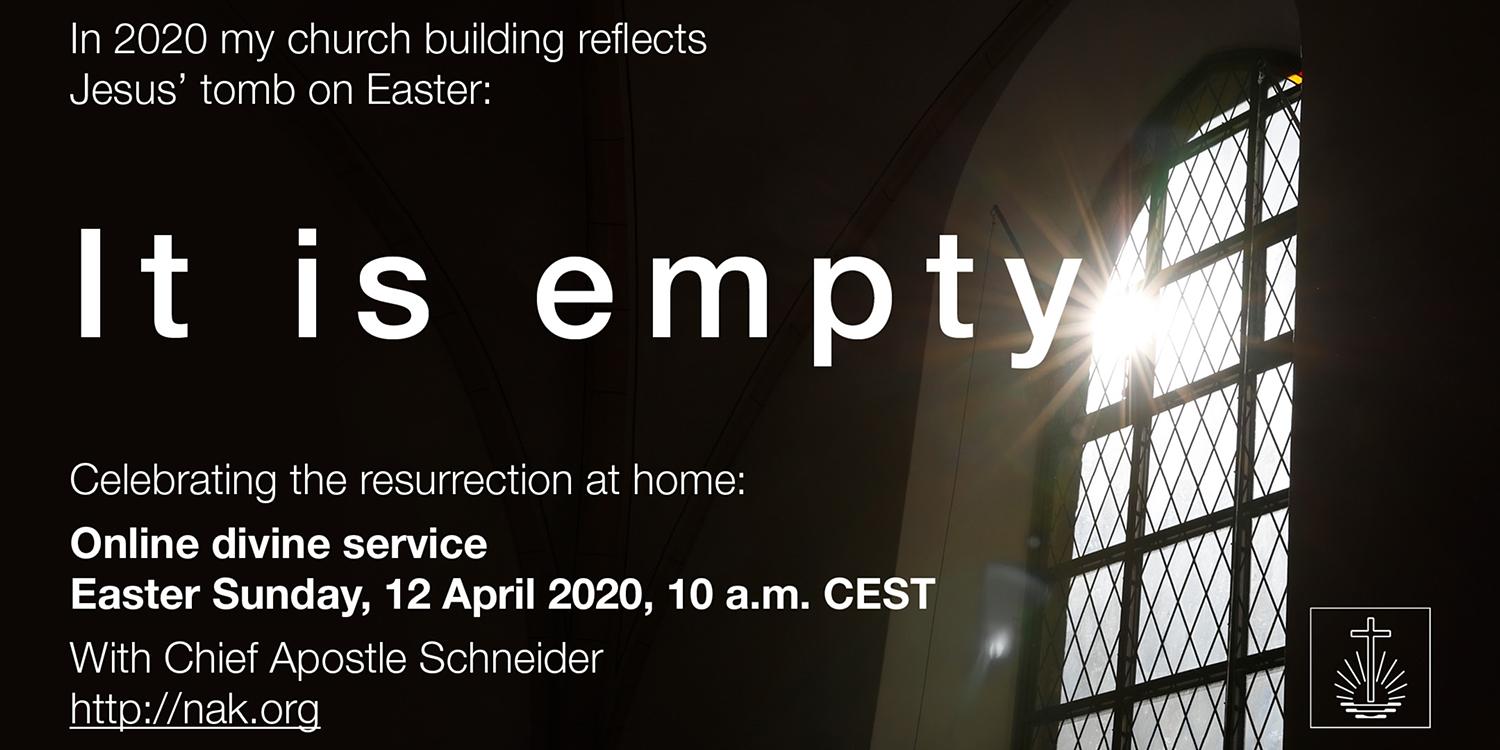 Easter 2020 will be a global event

A shared, global celebration of Easter—and of all things, it is the corona virus that has made it possible. Jean-Luc Schneider himself will conduct this divine service. A great deal of technology is necessary in order to get the signal out from the transmission site into the whole wide world.

Easter is the most important holy day on the church calendar. And Easter without a divine service is simply inconceivable. But in these times plagued by the corona pandemic, many things will be different: the churches will remain closed practically everywhere on earth—even on such high holy days. For this reason, the churches will have to explore other avenues. The New Apostolic Church is currently making its divine services available every Sunday by way of television and web-streaming—and this will also be the case on Easter Sunday. In consultation with all District Apostles, Chief Apostle Jean-Luc Schneider has decided that there will be a single divine service for the New Apostolic Church on 12 April 2020—but it will be a global service for all. In this way, the Church will reach all the believers—and bring the divine service right into their own living rooms.

On Easter morning, the event will be broadcast from Germany. The signal will emanate from the Church-owned Bischoff publishing house. The festive divine service will also be sent out to all continents on YouTube, via IPTV, by telephone, and on the South African television channel known as NAC-TV. The divine service itself will begin at 10:00 AM (Central European Daylight Savings Time), but the transmission will begin a quarter of an hour before that. The locally present congregation will be restricted to just a few employees from the publishers’ team.

All believers around the world are warmly welcome to participate in this divine service. Owing to the many different time zones, this will either occur live or as a delayed transmission. After all, the New Apostolic Church is already quite sufficiently experienced in this area: divine services transmitted globally by satellite—for example, on Pentecost—have already been the norm for years. In principle, the same thing will happen with this year’s Easter service, except that on this occasion, the signal will be sent over the internet, that is, on YouTube, Facebook, IPTV, and other channels: the Bischoff publishers will send the original signal to the central receiving sites of the District Churches, who will then make it available to the believers using the already familiar and previously employed links to the various internet portals.

In addition, the divine service will also be broadcast by television in some places, notably in Southern Africa, using the channel NAC-TV, or made available by telephone transmission to some regions in Europe.

Translations into many languages

Since the New Apostolic Church is represented all around the world, central divine services such as these are always also translated into several languages. Chief Apostle Jean-Luc Schneider will conduct the divine service in the German language. His sermon will be translated phrase by phrase into the English language. For this purpose an interpreter will stand at a pulpit near the altar but at a suitable distance for safety. Other translations will then be added: interpreters at the Bischoff publishers will use the already available interpreters’ cabins to translate into French, Portuguese, and Spanish, as well as German Sign Language. At the central receiving sites of the District Churches, other translations will be mixed in, depending on the languages needed.

The whole event represents a colossal endeavour that places high demands on technology.

The internet makes it all possible

The sermon, along with all musical contributions, will be recorded by audio and video and sent around the world using a streaming encoder: a stream bearing the German original sound with its English translation, along with a further stream for every additional language.

And what do the believers have to do in order to receive the Easter divine service? All they need to do is click on the link that they used already last Sunday. The only thing remaining is to sit back and enjoy the divine service on their laptops, tablets, smartphones, smart TVs, or even on their telephone. The links required to access the various streams will be announced once again—and well in advance—everywhere.