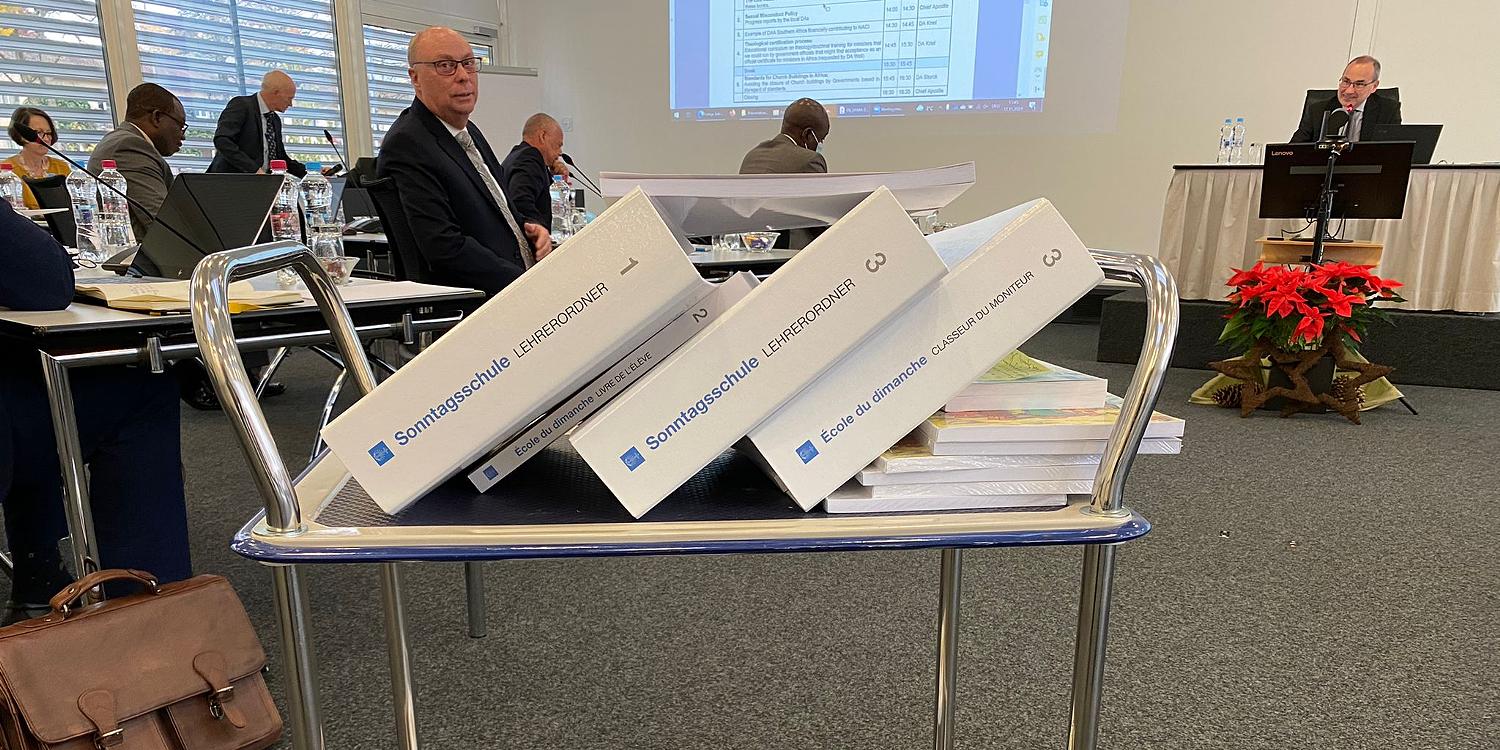 Focus on African issues in Zurich

The international Church leaders of the New Apostolic Church are currently in Zurich, Switzerland, for meetings. All except District Apostles Michael Deppner (DR Congo) and Peter Schulte (Australia/Western Pacific) were able to come. Already on Wednesday, the District Apostles who work in Africa came together.

They discussed topics that are of particular interest to the African Regional Churches. One of these is known by the abbreviation CTM, Children’s Teaching Material. In the meantime, an abridged version of the Sunday School teaching material has been created with a particular focus on the needs of the congregations in Africa—lower costs and shorter articles. The reactions of the District Apostles have been very positive. After all, they have to ensure that the teaching material is translated into several national languages. District Apostle Tshitshi Tshisekedi from the Democratic Republic of the Congo is already waiting for the files: “We do not only use such an abridged version in the rural regions. It is also a great help for our many urban congregations.”

The District Apostles will be receiving the digital files shortly so that they can have the teaching material printed locally and distribute it to the congregations.

The fight against sexual misconduct

For years already, the New Apostolic Church has committed itself in the fight against sexual misconduct with appropriate measures: training of ministers and functionaries, policies against sexual misconduct in pastoral care, establishing panels to deal with suspected cases in the congregations. Such measures have also come into effect in our regional churches in Africa. In the New Apostolic Church Southern Africa, for example, the responsible panel is called Safeguarding Committee. It consists of ministers, psychologists, and lawyers. The name is meant to express that preventive measures are necessary, and not only once something has happened. Committees of this kind now exist in every apostle area of the Church. A sexual misconduct policy has been in effect in South Africa since 5 July 2020. A day later already, a first case was reported. Still a huge challenge, District Apostle John Kriel says, is the culture of silence that prevails in society in general. However, the policy of “what you don’t talk about doesn’t exist” is no longer tolerable.

Chief Apostle Jean-Luc Schneider made his position very clear: “I want ministers to be absolutely clear on what sexual misconduct can do! They need to know how bad and damaging it is to the soul!” Signing a declaration of intent before ordination is one thing, he said. But what is more important is that those who are responsible in the congregations and districts are trained in prevention and how to handle any possible cases. “This is an important issue, and the Churches in particular have a responsibility,” added the Chief Apostle. “The people, our congregations, and our brothers and sisters are to know that the New Apostolic Church sharply condemns sexual abuse, nor will it tolerate physical intrusion of a sexual nature.”

On the subject of continental District Apostle conferences