The New Apostolic Church is a community that spans the globe: it incorporates some 9.24 million members in nearly 200 countries of the world (as of 1 January 2022). This amounts to a growth rate of approximately 1.3 per cent over the previous year.

About 86 per cent of the Church’s members live on the African continent, while 4.9 per cent live in Asia, 4.8 per cent in Europe, 2.5 per cent in North, Central, and South America, and 1.5 per cent in Asia and Oceania.

Doing the math: the fun facts

Doing the math: the fun facts ↑

Congregations of superlatives: the largest church building of the New Apostolic Church is the church in Tafelsig in Cape Town in South Africa with a seating capacity of 4,000. The New Apostolic congregation located at the highest altitude on earth is Pacharía in Bolivia. It is situated at some 4,055 metres above sea level. The congregation of Singapore is regularly attended by members from thirteen different countries.

It would take about 16 years for the responsible District Apostle to visit and conduct a divine service in every single congregation of Kinshasa: the capital city of the Democratic Republic of Congo is comprised of some 1,700 congregations. The country’s two Local Churches are home to approximately one third of all the Church’s members.

About 600 kilometres: that would be the height of the pile if one were to stack up all the communion wafers produced to date by all the bakeries of the New Apostolic Church. This amounts to 30 times the distance between the highest and the lowest points on the earth’s surface, namely from the top of Mount Everest to the deepest part of the Mariana Trench. 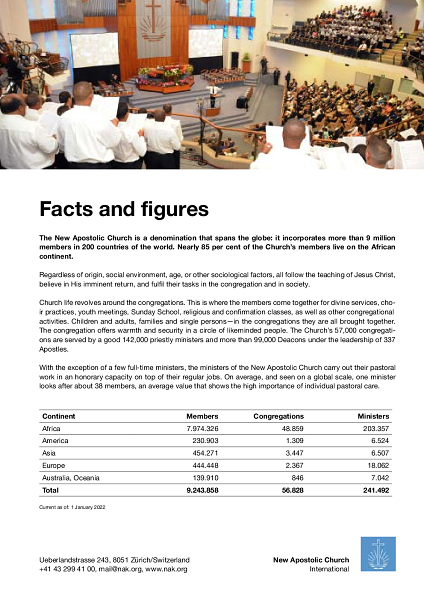